Carriers are pretty overt about making consumers pay for their devices using long-term contracts or high amounts of cold, hard cash. They're not so open about the subsequent payment in tears - thick, heavy tears dropped waiting for Android updates that feel destined never to come. Well, Verizon Galaxy Note 3 owners, you've officially paid enough. It's time to wipe away those tears, for the Galaxy Note 3 KitKat OTA update is finally rolling out to devices. 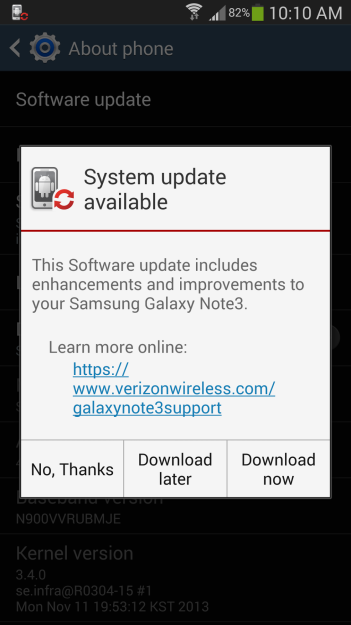 This update comes over five months since Google unveiled the sweet details surrounding KitKat, whetting Note 3 users' appetites for the features to come. AT&T, Sprint, and T-Mobile all rolled out the update before the end of March, but Verizon customers weren't destined for such good fortune. Their KitKat arrives today, in May.

The version number is N900VVRUCNC4. If it has yet to arrive on your device, it's time to fire up Kies or harass that update button.

[New Game] Chillingo Releases Striker Soccer 2, But The Goalie Failed To Block The Ads And IAPs