There it is folks, the Moto E has been announced. We've known about it for a little while thanks to a couple of leaks, one of which even included specs. Today, Motorola held an event in India to officially launch the budget handset, starting it at just 6999 Rupees (about $117 USD). Shortly after the show was over, US pre-orders also went live with a starting price of $129 without contract. The Moto E will ultimately roll out to more than 40 countries over the next few weeks. 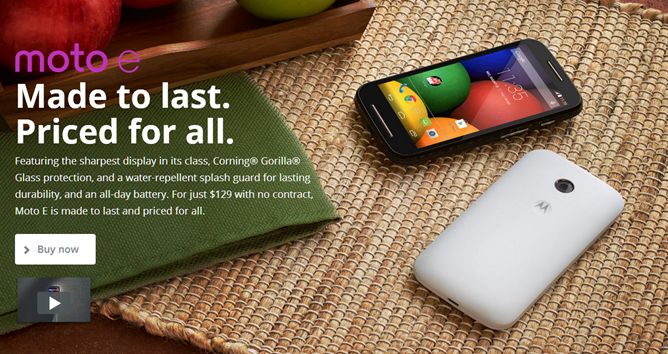 Also in Hindi, if you prefer.

The video promises a scratch resistant screen, water-resistant splash guard, all-day battery (dependent upon usage habits), customizable shells, and a guarantee of an Android OS upgrade in the future. An important detail is hidden in the small print which specifies that the phone will "receive at least one software update to the current KitKat 4.4.3 operating system." It's likely that Motorola is just legally covering itself in the event that the next major Android version exceeds the capabilities of the Moto E, but let's hope it doesn't come to that.

The Moto E will only be available in black or white, but customizable shells are also available with an assortment of colors that may vary by market. Sales of the low-cost handset to India will begin at midnight (11:30 AM PDT), exclusively available through Flipkart.com. US pre-orders are already available directly through Motorola.com with an anticipated delivery date between June 3rd - 6th for both the handset and any accessories purchased with it.

With more power and up-to-date software, the Moto E is an attractive bid to emerging and low-income markets. For other regions, Motorola is also kicking off a new promotional site, GoodbyeDumbPhone.com, directed towards encouraging people to give up their aging feature phones in favor of similarly priced smartphones. This strategy turned out to be a massive success for the mid-range Moto X, and it may give Motorola a commanding position in areas that are otherwise limited to very old and off-brand competitors.