At this point there's little doubt that Motorola will be unveiling the "Moto E" at its event next week. In addition to a leak on Facebook comparing the phone to the low-end Moto G, some new information and a promotional image has come out of FastShop, a Brazilian Internet retailer. According to the specifications that briefly appeared on the site, we're looking at a phone that's very similar to the G with a redesigned case and budget-minded specs. 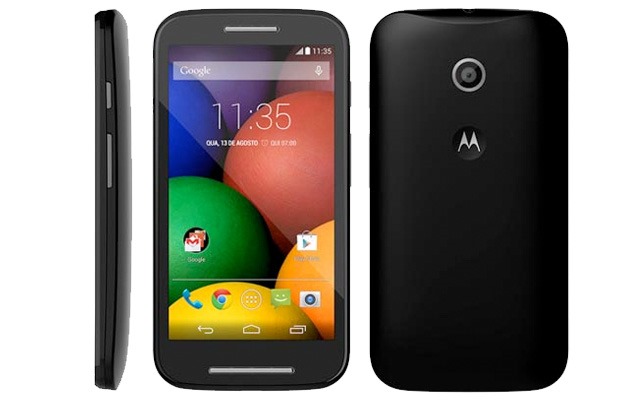 Here's the breakdown: the XT1025 phone allegedly has a 4.3" screen with an unknown resolution (I'd guess 720p), a 1.2Ghz Snapdragon dual-core processor, 1GB of RAM, 4GB of storage space plus a MicroSD card slot, and a 5MP rear camera. Strangely, the phone appears to have no front-facing camera (unless the lens is very well hidden behind the black case) and it looks like the main speaker has been moved to the front, beneath the screen and roughly opposite the earpiece speaker. Otherwise the "Moto E" looks like it has the same basic shape and design as both the G and the X. Reportedly this cheaper phone will come with dual SIM card slots (a popular feature in remote areas) and a 1980mAh battery. Software is Android 4.4 - note the virtual navigation buttons.

Assuming that the Moto E would hold a price point below the Moto G, it would need to be very cheap indeed, since the G is already under $200 without a contract. It's possible that Motorola might have something else to show off in London - the "X+1" rumors have been floating, and the Moto 360 watch is due sometime this summer - but we haven't seen any reliable evidence for either. We'll be covering the event this coming Tuesday.

Source: Jonas Henrique (Google+) - thanks for the tip, Paulo Botelho!