In our recent post about Google's plans to break its Search sauce out of the dedicated app and bring it to the rest of Android, I alluded to the fact that we'd have more to talk about later. Specifically left un-discussed were the implications of new navigation buttons for the Android home screen. As readers will remember, our information leads us to believe that the navigation bar will be getting a shakeup, with the new layout including the typical back and multitask buttons, plus a "Google" button, which appears - for now - to be an actual Google logo.

Pressing the "Google" button appears to trigger Search, which would help users perform general searches or app-specific actions. The back button seems to work as you'd expect, and the multitask button appears to bring up the multitasking view we saw a glimpse of when looking at Google's potential plan to unify Chrome and Search on Android. So where's the home screen? Today's post will take a look at what Google seems to be experimenting with - a new launcher system, a new look for notifications, and a new quick settings shade. Let's dig in.

This rumor gets a confidence rating of 7 out of 10. We are confident that a change like this is probably coming, but the changes seen in the information available to us are so far-reaching that it's hard to be sure to what extent those changes will be implemented. It is clear Google is experimenting with the home screen and notification system, and in fact things like Android Wear give good hints that some of these changes actually may survive into a public Android release, but it's best to approach things like this with caution. The launcher we now know as the Google Now Launcher went through several revisions before reaching release with the Nexus 5, but the core principles of the launcher remained the same. It is probably safe to say the same pattern will hold true with these changes.

I'll try to get through the actual rumor in as concise a manner as possible, since the "Evidence" section is what will really tell the story here. Basically, it appears that Google is experimenting with drastically altering the launcher experience. To do this, it will require users to rely more heavily on the multitasking screen, accessed from its usual right-most navigation button. From here, users can launch an app from their hot seat or swipe to the right to see more apps.

Notifications will apparently be split into two parts - the shade will still pull down from the top, but "high priority" notifications will appear first, and a swipe up will reveal low priority or ongoing notifications. Quick settings will also be present in a secondary shade (as it is now), though we do not have firm information indicating what exactly that interface will look like.

Before we continue, it should be noted that - should they come to fruition in some form - these changes could be limited to Google's eponymous Now Launcher as part of the overall "Google" experience, though changes to multitasking and the navigation buttons could point to a wider sweep. It's always worth stressing that with unreleased software features, our information is rarely 100% complete, and anything can change.

For this rumor, it may be helpful to take a broad view and then discuss the elements individually. As usual, we won't post source images of unreleased software, opting instead to recreate the interfaces based on the images or information available to us. Rest assured we replicate the interface as faithfully as possible.

Below is a quick animation sketch of the overall functionality. Note that launcher icons in the mockups below have been replaced with simple squares to keep the focus on the interface.

Multitasking, it appears, will be the user's primary point of entry to the launcher. What's interesting, besides its overall design (showing a stack of app interfaces as cards rather than a lineup of thumbnails), is that it looks like the user could swipe down on the action bar of an app to enter multitasking, if for whatever reason they don't feel like pressing the dedicated button. It isn't clear if this functionality will be available for all apps, but it is being experimented with at least in some of Google's apps. Apps would be dismissed from multitasking by swiping down. 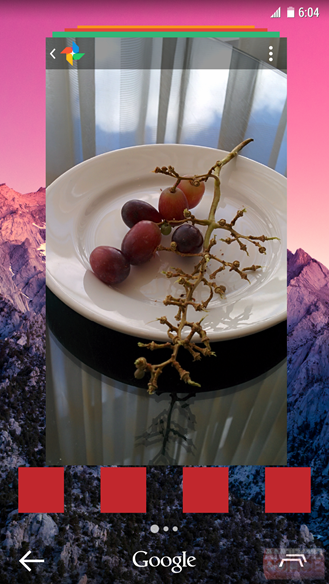 From the information available to us, it looks like Google is experimenting with eliminating the app drawer in favor of an iOS-style app grid. This is one of the farther-reaching changes, with as yet unknown implications for widget placement.

What is apparent, though, is that the hot seat would remain, sans app drawer button. As we always note with unreleased software, anything can happen. 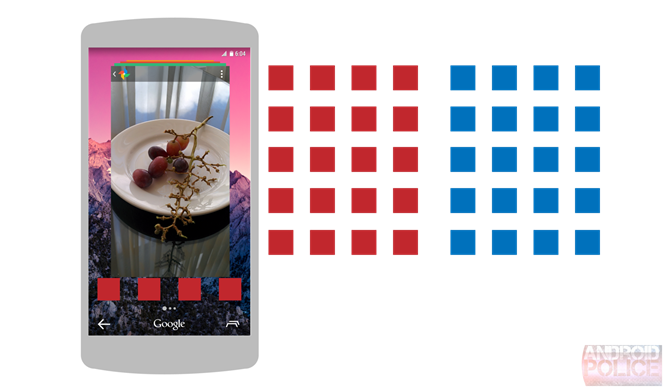 Update: As commenter Zargh notes below, Android 4.4.3's change log has a few curious lines that sound like they could be related to the app grid.

What this sounds like is that there may be an option to either use or not use the app grid, with widgets showing up based on that selection. Time will tell.

Presumably, the addition of the grid could rule out widgets - they don't fit into any obvious place in the overall picture (except perhaps between recents and the grid itself), but traditional, customizable home screens are likely still an area that's under consideration with these changes.

The app grid itself could just be an exploratory element, or there could be more to the placement of traditional home screens than our information suggests. As always, remember that any pre-release functionality, no matter how convincing the evidence, could change.

From what we've seen, Google appears to be experimenting with a notification shade that - while familiar - sees a significant stylistic overhaul. It still pulls down from the top, but notifications are now presented in the same style as Google Now cards (these notifications are internally referred to as "nowtifications," get it?). Some high priority Now cards may also appear in the notification shade (for instance, if it's time to leave for an appointment), and would be placed in the top "half" of the shade, with low priority or ongoing notifications just a fluidly-animated swipe away. Assuming our information is correct, this revised notification shade would give richer meaning to notifications' priority levels, and greater separation for users tired of a cluttered shade.

It also seems that the notification shade will greet you with a time-appropriate phrase and your next alarm, or the current weather. 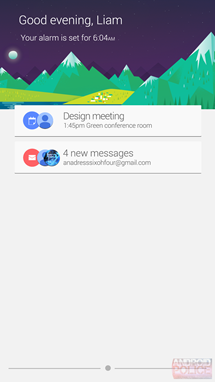 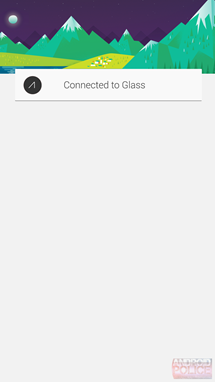 Google Now has moved around a lot since its initial introduction. At present, it lives to the left of the leftmost home screen. In the new launcher, it would be below the screen, accessible from any home screen with a quick swipe. This is where most of your predictive cards would live, and for now it appears the same as the current Now interface, though we've seen evidence that the "Ok Google" hotword is destined to work almost everywhere.

This is probably the most wide-sweeping rumor we've recently encountered, so it's worth approaching with some caution. It's clear to us that Google is exploring these changes, but not that they are finished, or that they will appear in an upcoming Android release. Taken with other rumors we've seen, it seems likely that some of these features will appear, though their final implementation remains to be seen.

Changes like the move to an app grid seem far fetched for Android, which prides itself on the ability to customize home screens with widgets and other changes. It's possible that the app grid is only an exploration, or that traditional home screens could appear between recents and the grid - again, anything can happen.