This morning Android Police editor David Ruddock received a package in the mail. The only thing enclosed was a lime-green crowbar. 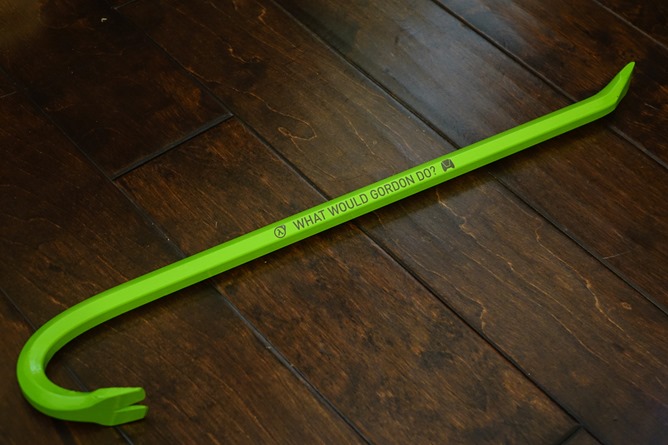 It says it all, really.

PC gamers will recognize the logo for Valve's much-loved science fiction shooter Half-Life 2 emblazoned on the bar, which is the iconic starter weapon for the game. "What Would Gordon [Freeman] Do?" and NVIDIA's SHIELD logo, along with NVIDIA's signature green color, makes this a not-so-subtle indication that the game is coming to the Android-powered SHIELD at some point.

Fans of Valve's work already know that the SHIELD is getting a full port of the shooter-puzzle game Portal, which runs on the same Source game engine as Half-Life 2. The latter is a much longer and more complex game, with a full single-player story mode covering an alien invasion and various conspiracies, so it's arguably the more ambitious title to port. Those who like one tend to like the other, and with the Source engine running on Android it only makes sense for Valve to bring more of its celebrated franchises to the platform, or at least to SHIELD. Other Valve games that use the Source engine include Counter-Strike, DOTA 2, Left 4 Dead, Team Fortress 2, and various add-on packs and sequels.

Right now the green crowbar is the only indication of Half-Life 2's upcoming release. We don't have any dates or screenshots, or anything else, for that matter. But we can say it's a pretty good time to pick up a SHIELD if you're a fan of Valve's games.