We've steered clear of many of the rumored photos of the upcoming LG flagship refresh, if only because they weren't very good or very clear. But the latest spy shots from GSM Arena look like the real deal: an "LG G3" that brings the company's top-of-the-line phone back in a bigger and more evolved form. Oh, and it's gold. Very, very gold. 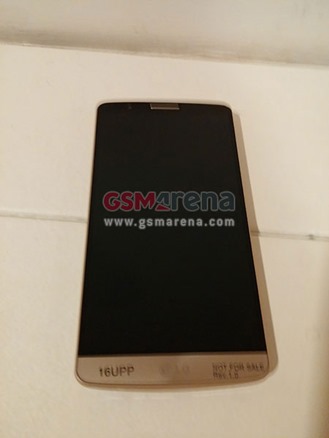 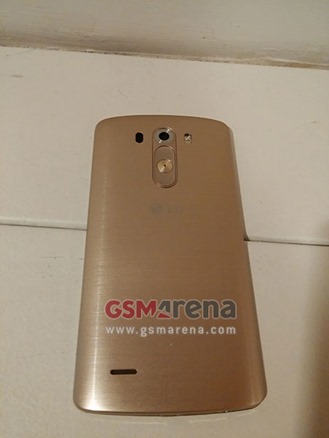 Compared to the international version of the G2, this phone looks a little bigger and less rounded, and the front façade has been given an overhaul with a case-colored insert beneath the glass screen. It looks a little odd, especially after LG has pushed so hard for vertical symmetry - it brings to mind some of HTC's "chin" designs. Note the logo on the bottom and no hardware buttons, which indicates that LG will stick with its virtual navigation approach. Speaking of buttons, the rear-mounted power and volume buttons are back, with the former changed into a circle and the latter flattened out. According to the leak, the hole to the left of the camera is a "laser" of some kind intended to assist with low-light shots.

Rumored specifications include a 5.5", 2560x1440 display, a Snapdragon 801 processor, 3GB of RAM, a 13MP camera, and water resistance. Various new tricks in LG's customized software are also indicated, including a voice-activated camera shutter. We can't verify the validity of these photos, but they seem more than plausible. We'll know for sure after LG's press event on May 27th in London, where the G3 is expected to be officially unveiled.

[New Game] Aliens Drive Me Crazy Provides Just As Good A Reason As Any To Stand Up To An Alien ...

DrinkAdvisor Makes Easy Work Of Finding Your New Favorite Bar, Even Suggests What To Drink ...