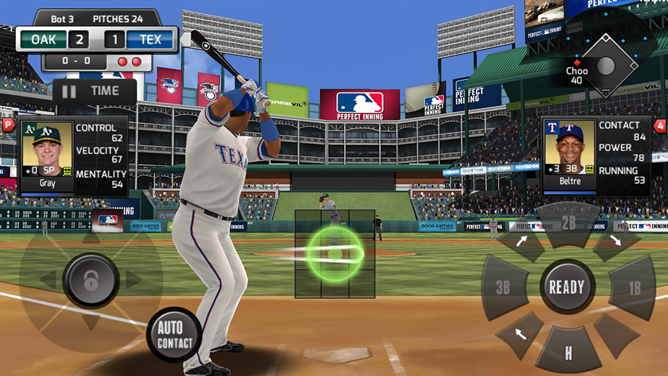 Still with me? OK. MLB Perfect Inning is a high-end baseball sim from Gamevil. In addition to some very impressive graphics and and the licensed likenesses of over 200 Major League Baseball players, it features motion capture from real-life pitchers and catchers. Players and stadiums are rendered in detail, or at least enough detail that it's appealing while still being playable by most recent Android phones and tablets. The player models look like they're at about Dreamcast level, and the interface has been modified to allow for more pitching and batting decisions, even on a touchscreen.

Most of the features from a console-style baseball game are present, including all-star recruiting, drafts and trades, and a full season mode. And because baseball is an inherently slow sport and mobile games need to be limber, players will have the option of speeding up games with a variety of play styles, including full manual, offense only, a highlights-only mode, and full AI, where your team plays for you. Which I guess is more of a screensaver than a game. Multiplayer is limited to leaderboards.

Dedicated Android gamers know what's coming next. This is a Gamevil game, which means that it's free, and it also means that there's a massive upsell. Sure enough, Perfect Inning uses the somewhat manipulative dual-currency system for "leveling up" players and facilitating drafts and trades. If that wasn't enough, it's also got a time-based element - your players will get low on stamina and require a recharge or time on the bench to get back to full strength. I suppose that stamina and money are both parts of real baseball, so the tired in-app purchase model makes a little bit of in-universe sense.

What doesn't make sense is this warning in the app description: "MLB Perfect Inning will need permission to access your phone numbers within your phone. The information collected will only be used within the game. The data collected is encrypted and will not be shared with others."Hey Gamevil, what possible reason could a baseball game have for taking a peek at my phone book? Just asking.

Update: A Gamevil representative contacted us after reading this article, stating that the collection of phone numbers is required for Gamevil's South Korean players (Gamevil's corporate headquarters are in Seoul), and the company hasn't been able to remove the data collection from the international release. The representative noted that they're working on a way to remove it for international players.