Hardcore Android fans are hard to please. We should know. So for a new company to attempt to please the most vociferous of Android users with a high-end phone that also manages to compete on price is ambitious to say the least. But that's what OnePlus, with their One phone, is doing. And if a day or so with the phone is indicative of the overall experience, they might have actually achieved success. 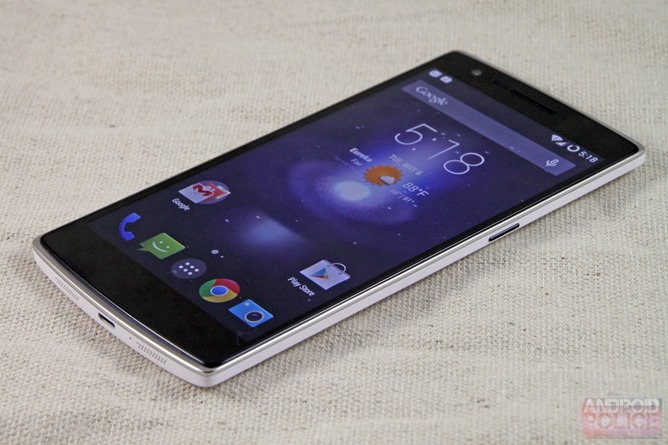 The OnePlus One fits squarely in the super-sized "phablet" category with a 5.5" 1080p LCD screen, and other specs like a screaming Snapdragon 801 processor, 3GB of RAM, a 13MP rear camera, a 3100mAh battery, and up to 64GB of storage put it near the top of the Android pack. Throw in the fact that the One is running a customized version of CyanogenMod (labeled "CyanogenMod 11S," built on KitKat 4.4), and you have a truly unique combination of hardware and software. It doesn't hurt that the phone is being sold Nexus-style in an unlocked LTE flavor. At $299 for the 16GB model, you've got a device that's worthy of consideration for any hardware junkie... at least on paper.

The One looks and feels like a high-end Oppo device, and that's probably no accident: it's a big, smooth slab, with sharp corners for the edge and nowhere else. The rear of the phone has a slight bow outwards like the Nexus 5, making it a little easier to grip than a flatter device like Sony's Xperias. The configuration is pretty standard - you won't find any rear-mounted buttons or swiveling cameras here, just your basic slate layout.

On the front the black screen contrasts with the white and chrome shell (the 64GB model is black), and the capacitive navigation buttons beneath the screen are just barely visible with a blue illumination. These seem a little out of place on a "pure" Android device, especially considering the odd ordering: a pre-4.0-style Menu button on the left, Home in the middle, Back on the right. You activate the Recents menu with a double-tap of the Home button, and slide up to see the Google Now button. Not everyone likes physical navigation buttons, and I imagine that even fewer of our readers will appreciate the non-standard layout. You can change this up in the software - more on that later. 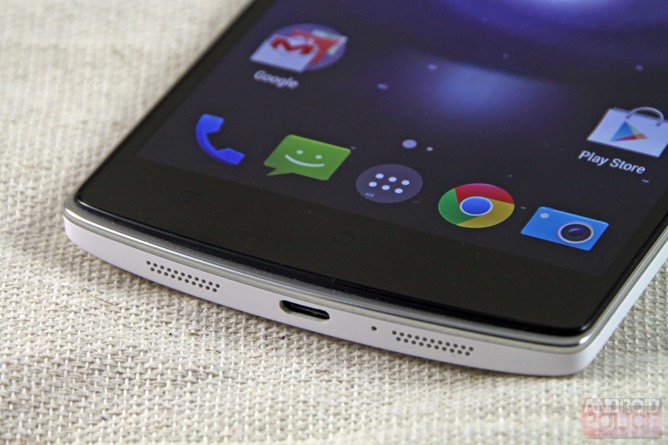 The screen is circled by a chrome-painted plastic ring that's slightly recessed, then the white shell underneath. The MicroUSB 2.0 port is on the bottom, flanked by dual speakers (real dual speakers - this isn't a prosthetic grille like the Nexus 5). The slim and slightly hard-to-hit volume rocker and power buttons are on the left and right sides, respectively, and the only thing up top is the headphone jack. On the back you'll find the camera and dual LED flash in a surprisingly compact chrome module, with classy logos for OnePlus and CyanogenMod, plus the typical model and FCC info.

The physical design is very standard, very sparing, but it works well. The One isn't going to turn heads like the HTC phone of the same name, and it's not divisive like the dimpled Galaxy S5, but it's more than presentable. Screen size preferences vary greatly, and I usually don't go above 5" for my personal machines, but I will say that the thin bezels and 8.9mm body makes the phone much easier to use than it might otherwise be. 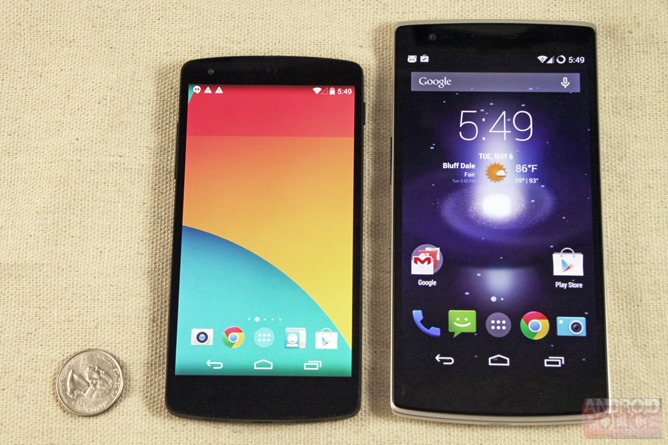 The most surprising thing about the OnePlus One is just how solid it feels, for lack of a better word. Compared to the Nexus 5 (which uses essentially the same slate design) it's a rock, and it's close to the admirable build quality of HTC and Motorola. I always think of the Nexus 5 as the phone equivalent of a pony car: it's cheap and powerful, but the build absolutely reflects the purchase price. The OnePlus One feels like it should cost much more than the $300 it does. I know that the decision to forego a removable battery is a divisive one, but I doubt that the phone could feel so solid if the back came off.

Software is CyanogenMod. That's it. If you've used a recent CyanogenMod 11 build, you know what to expect here: stock Android with lots of useful additions and tweaks. The "11S" build has some unique touches, most notably in the lock screen, but otherwise it's a more customizable version of KitKat, with all the speed and stability that this suggests. The Play Store and Google apps are included from the get-go, and though the phone is not rooted out of the box, tinkerers will be glad to know that the bootloader is easily unlocked. 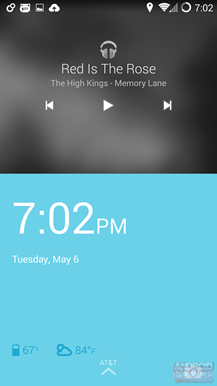 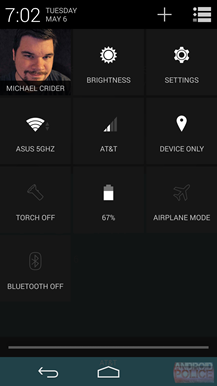 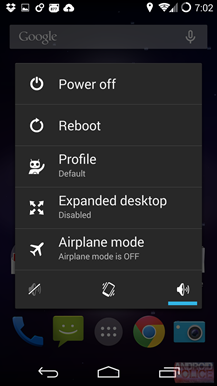 The navigation buttons deserve some attention here. Just like CyanogenMod loaded up on a phone with capacitive buttons, OnePlus One users have a choice between the build-in buttons and a somewhat superfluous virtual nav bar, which can be customized to a degree. You can switch between them in the settings menu. When the virtual bar is enabled, the button backlight (which is pretty dim to begin with) turns off, and the buttons basically disappear. It's an interesting approach, but I get the impression that OnePlus is trying to have its cake and eat it too and please all users, rather than making a smaller phone by omitting the hardware buttons. That, or they're simply recycling some Oppo components and letting CyanogenMod handle the software side. 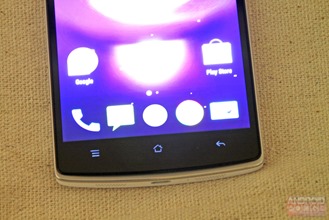 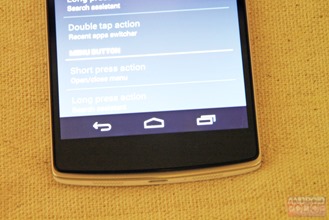 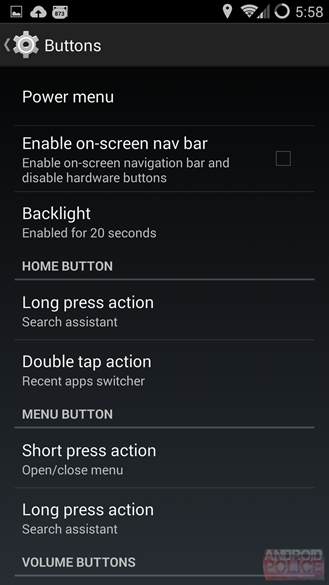 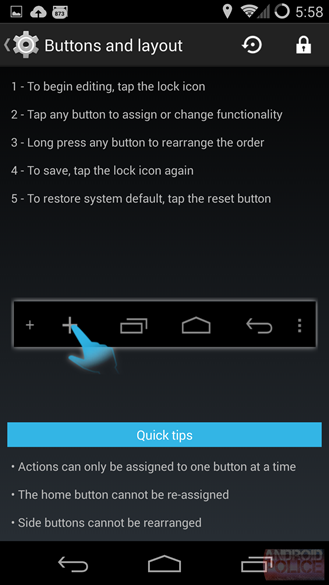 After a solid day of use, everything seems to be pretty impressive, with one exception: the earpiece. While the One can pull down a reliable AT&T HSPA signal even in my remote area, the speaker above the screen is weak and low even at the highest volume setting. You need to place it almost perfectly over your ear canal to hold a conversation, even in an entirely quiet room. It's also important to note the lack of a MicroSD card slot, which some who "Never Settle" might object to. The 64GB model, which will be available for a very reasonable $350, may mitigate this somewhat. 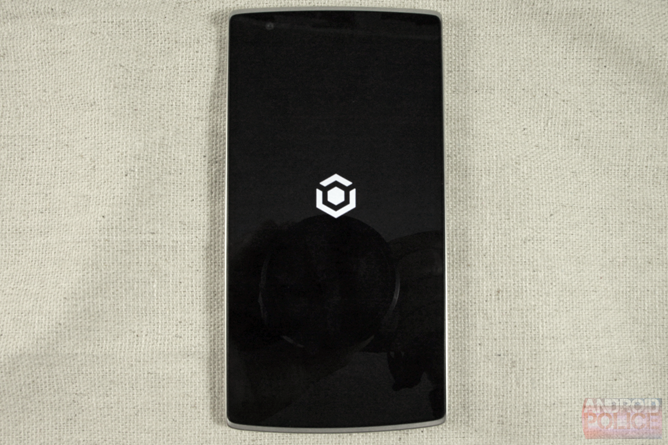 We'll have a full and exhaustive review of the OnePlus One next week, include all the nuts and bolts of the hardware and software. If you have any questions or features you'd like us to pay particular attention to, let us know in the comments section.