Bookmarks - we all use them. Sometimes. Maybe. Maybe not since like 2011 in my case (I really, really don't like bookmarks). But bookmarks have remained a relatively unchanged experience on desktop browsers even since the Netscape days - you CTRL+D, the page goes into a list, maybe that list has folders, and that's that.

This stale experience has helped give rise to read-it-later apps, content aggregators, and even social networks (Pinterest, for example). The reason? They provide a more fully-featured, rich experience when it comes to managing and displaying the content you're interested in looking at again later. Bookmarks are about as rich and fully-featured as a manila folder. 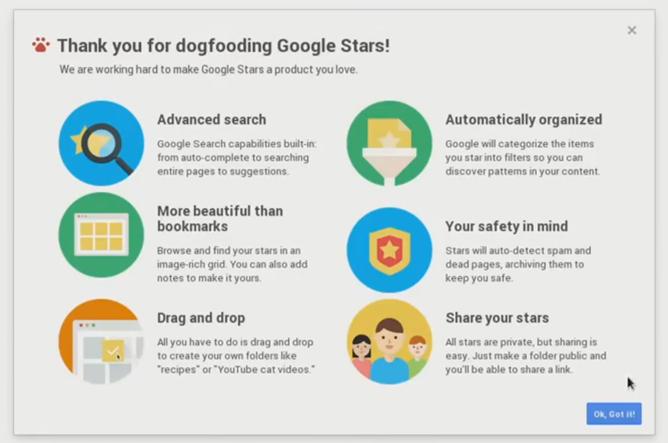 It seems Google is interested in doing something about that, and that "something" is currently in testing, and it's called Google Stars. Google Stars is sort of a Pinterest meets Diigo meets Delicious meets Google Keep meets Google+ way to manage content on the web you want to save for later. Check out this video, posted on Google+.

It is still based on folders, but the folders are more like collections or albums. Rather than simply saving a URL and a header, Google Stars will actually look at the content on the page and use that content to power automatic filters, scrape images and text to create Google+-esque preview tiles, and even detect if one of your bookmarks contains malicious content or is a dead link, automatically archiving them so they get out of the way. You can even add notes to your individual bookmarks, and managing your folders will be 100% drag-and-drop. Stars will also detect the type of content you're starring (no doubt similar to the way Google+ does things), be it a web page, an image, a video, or something else. 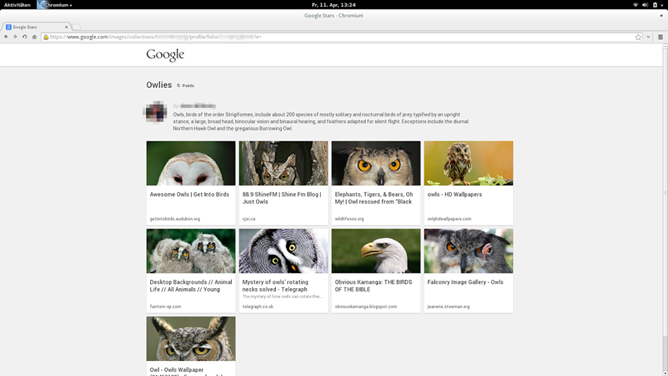 Your folders aren't just dumb folders anymore, either - they can be shared with your friends using a generated link. So, if you're working on a collaborative research project, you can then share your folder of bookmarked pages with your colleagues. That's not to say similar services don't already exist on the web, of course they do, but with Google's solution, you can all but be assured these shared folders are then synced across all your devices, and will have rich search integration. In fact, you'll allegedly be able to search the entire text of your bookmarked pages for content - that'll definitely be nice. Hopefully sharing will support Drive-style permissions and such eventually, but Stars is still in testing, so the features at launch may be relatively limited.

What's this have to do with Android, considering all the visual evidence we have here is clearly from Chrome / Chrome OS? Well, Google doesn't exactly go launching new products like this without a battle plan for mobile, so you can be assured Stars will be coming to Android eventually, whether as a part of the Chrome app, or perhaps more logically as a standalone app, at some point. We'll be on the lookout for it, and perhaps we can expect to hear some more about Stars at I/O this year.

This information, by the way, comes courtesy of Florian Kiersch on Google+, and you can catch his previous posts on Stars here and here.