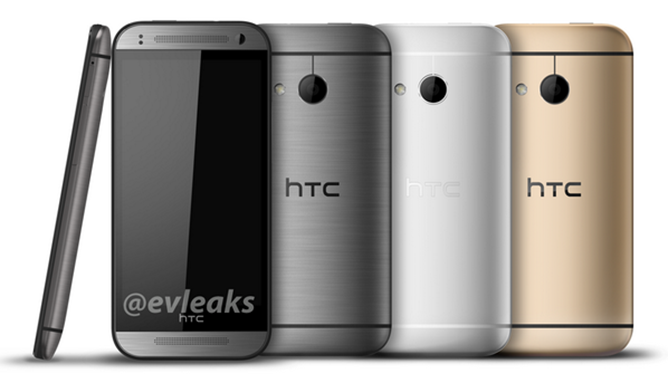 Metal body? Check. Dual front-facing speakers? Check. But there's at least one feature that's not there: the much-ballyhooed Duo camera from the One M8, which uses a secondary rear camera sensor for various quality-enhancing photo functions. Earlier leaks from less reliable sources also omitted the Duo camera (though the design on those leaks was somewhat different - note the placement of the proximity sensor on the front). The Evleaks post also shows a single LED flash module on the back, as opposed to two on the M8. HTC's change to virtual navigation buttons, not to mention an annoying center-placed logo on a big bezel, seems to be here to stay.

A previous post from Evleaks gave the standard specs: 4.5" 720p screen, a Snapdragon 400 processor, Android 4.4.2, an anemic 1GB of RAM, and 16GB of storage plus MicroSD card slot. The rear camera is an alleged 13MP with the front-facing camera being 5MP, meaning that the "Ultrapixel" camera design is reserved for the flagship. Based on the disappointing results from our review, that might be a blessing. Also note that a phone with a 4.5" screen is stretching the definition of "mini."

Price and release date for the HTC One Mini 2 are currently up in the air, but "summer" and "slightly cheaper than the M8" seem like pretty obvious bets.