Google is sneaking one more update in this week, and it's an odd one. After pushing out the new Docs and Sheets apps, Google is now updating the main Drive app and actually removing some functionality. You will now be prompted to install Docs or Sheets if you want to edit, but it's not as bad as it sounds at first. 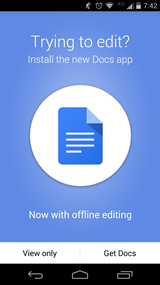 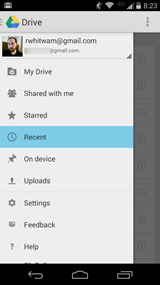 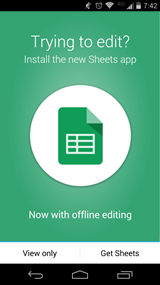 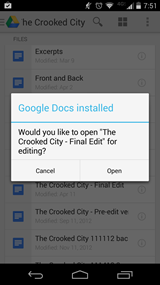 The first thing you'll notice when updating is that you need to have the new Docs and Sheets app installed to edit anything. It's a little odd – you are actually prompted to install them when you try to view and edit anything. Without these new apps installed, you get a crappy view-only mode that doesn't even have word wrap.

Once you get Docs and Sheets installed, the experience is almost the same as it ever was. The Drive app loads up your documents via these other apps with the same options you'd have if you simply opened Docs or Sheets. Yeah, it's a little confusing, but it might allow Google to update editing features of each file type individually rather than rolling out a new version of Drive each time.

We know that a Slides presentation app is coming, which should plug in like the exiting apps do, but there are also hints in the APK strings that a Drawings app could be on the way as well.