Despite the behind-the-scenes drama with Google and Lenovo, Motorola has been on a roll when it comes to hardware. The Moto X, Moto G, and Verizon's 2013 DROIDs are all well-regarded, so naturally people are wondering what's coming next. We'll find out in a little less than two weeks: Motorola will show off its next smartphone in London on May 13th. 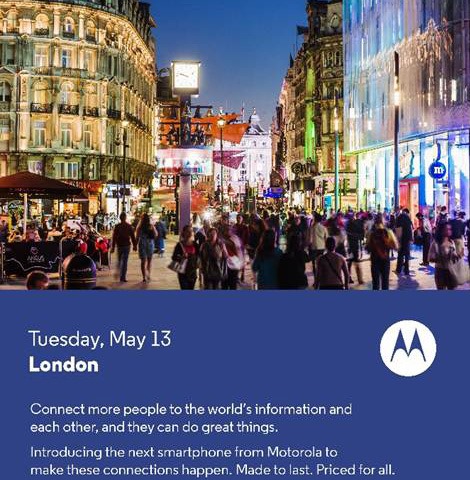 It's only been 8 months since the release of the company's flagship Moto X, so a follow-up is possible, if a little early. Evleaks (whose pre-release info is generally very reliable) posted a logo for the "Moto X+1" earlier this month. There have also been unconfirmed rumors of a "Moto E," a low/mid-range device with a 6.2mm profile. The press invitation's mention of "made to last, priced for all" could certainly indicate a cheaper device. But as far as confirmed information goes, we've got nothing, zip, and nada.

The Moto 360, one of two launch devices for Google's watch-focused Android Wear platform, has a tentative release date for "summer." It's possible that the 360 could get dual billing with the new smartphone, but considering how Moto has been focusing on one device at a time with its PR lately, I doubt it. Also note that LG is planning its own event on May 27th, where the flagship G3 is expected.