I love to drive. No, seriously. I'm someone who actually enjoyed commuting to work, back before I landed my first gig putting words on the web. I'll gladly run to the grocery store to knock a few items off our shopping list, then sometimes head back on the same day to pick up something we forgot. If a friend lives less than two hours away, then they're local. Let's hang out this weekend.

The thing is, all this driving burns through gas, which in turn burns through funds. As fun as it is to gun it when the traffic light turns green, coast in the left lane on the interstate, or brake as briefly and as rarely as possible, these actions all impact how much drivers have to spend down the line, both in fuel and maintenance. Automatic Link, a product that received Android support earlier this month, is precisely the type of tool a price-conscious driving enthusiast needs to improve their driving. It requires an upfront investment, but for the dedicated, it's a purchase that will pay for itself over time. The question is, will you let it? 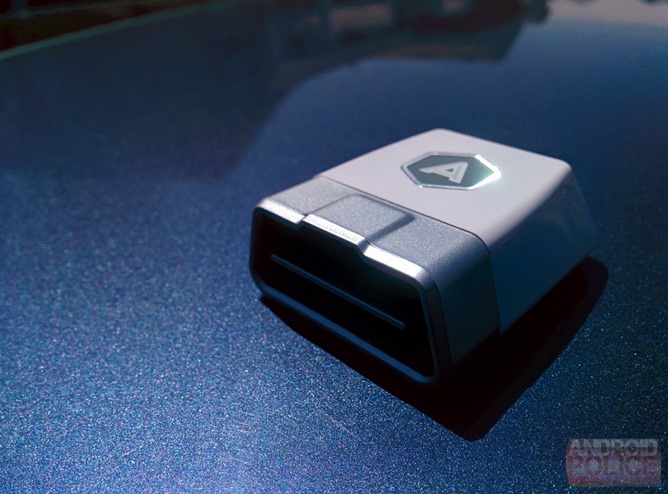 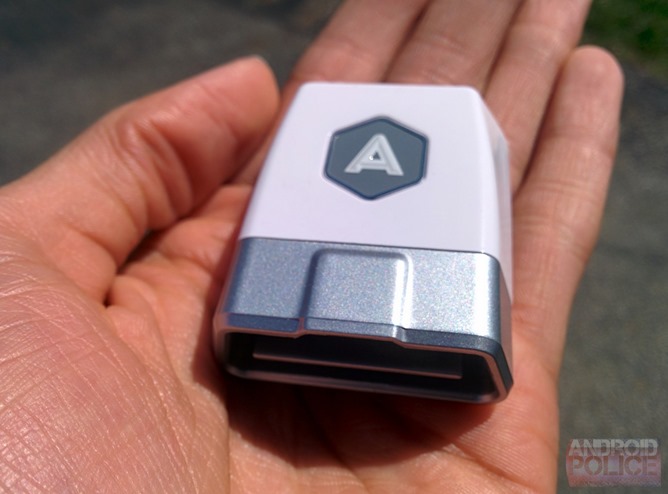 The Automatic Link is a dongle that plugs into your car's data port and connects to your phone using Bluetooth Low Energy. It's roughly the size of alternative OBD2 adapters, which you could find for up to 1/10th of its $99.99 price tag, but it does come with some perks. For starters, it doesn't have any LEDs serving as a constant reminder to its presence. As long as your port is tucked away somewhere out of sight, any visual signs of the Link will be too. This is especially good at night when there's already enough lights to deal with.

The Link's connection to your phone is also encrypted and protected by a 6-digit PIN printed on the back of the unit, so only someone with physical access to it can pair up. Some adapters don't come with any security at all, so that's another addition in the Link's favor. 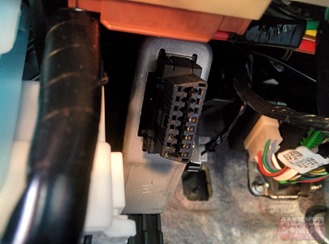 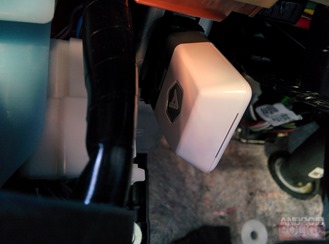 A big distinguishing feature of the Link is its audio feedback. When you accelerate too quickly, brake too hard, or speed up over 70mph, it chimes. This real-time feedback is a big draw to the Link for me. With the exception of speeding on local roads (I wish I could set it to chime when I'm going more than 5 miles over the speed limit, for example), I can better relax about my driving knowing that, if I'm not hearing a beep, I'm probably not driving too aggressively.

These things aside, there isn't much else to the Link itself. So let's move on to the app, as that's where most of the magic happens.

I installed Automatic in the parking lot of the store where I picked it up, which shows just how quick and intuitive of a process it is. If you can follow on-screen instructions, you can get going just fine. Even the most car illiterate people shouldn't have to call the mechanic for help with this one. 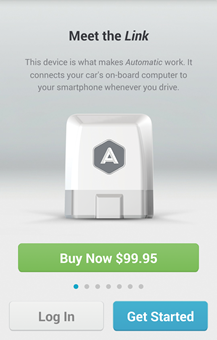 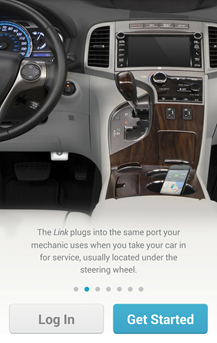 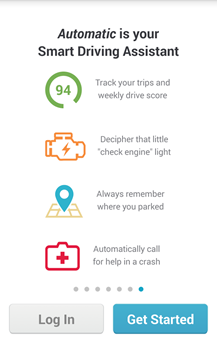 You don't plug in the Link until after you've typed in the its 6-digit PIN. After this, you need to provide the app with your car's VIN. It's possible to swap a single Link with multiple vehicles, and this will help it automatically keep track of which is which. 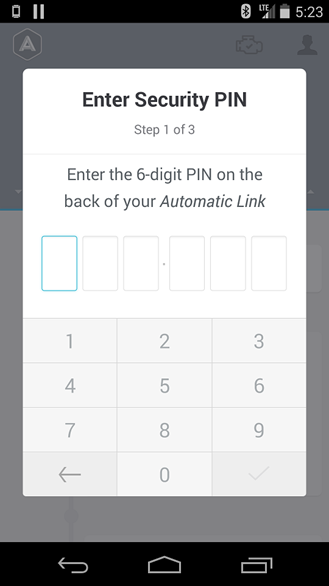 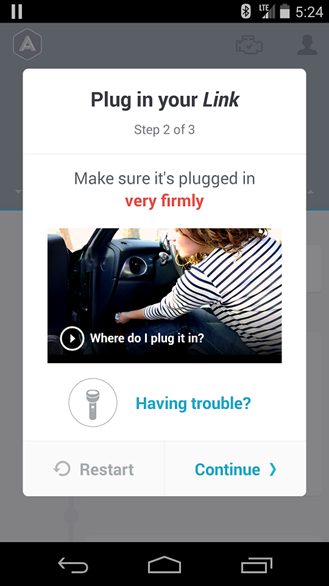 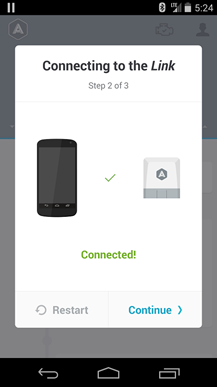 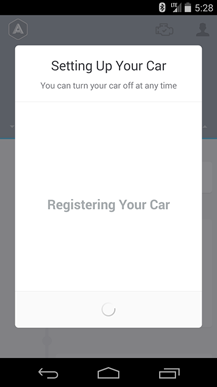 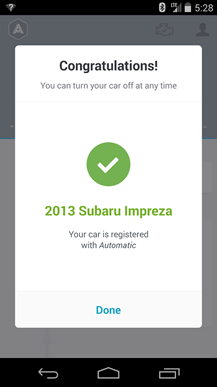 Automatic's mission statement, so to speak, is to help its users save money at the pump. This is evident in the Link's driving-focused audio cues, and it's even more apparent in the companion app. The entire experience centers around a driving score, which goes up the more cautiously you drive. A driver with a perfect score of 100 should be getting much better gas mileage, and therefore saving more money, than someone with a score down in the 30s. 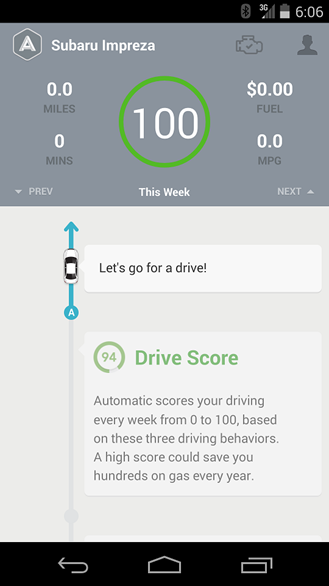 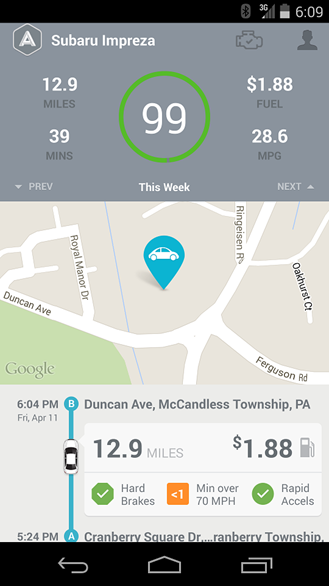 Automatic provides an estimate of how much gas each trip costs you. The app pulls these prices automatically and doesn't provide an option for inputting more specific information, so use these numbers more as a guide than anything else. Your estimated miles per gallon are displayed alongside this other information, but again, use this for general impressions. Similar to using fitness trackers, where each product tends to pick up on sometimes widely varying numbers of steps, what matters more is trends over time, and that's something Automatic places an emphasis on.

I found that the app was pretty forgiving with its scoring. If I braked too hard three times in a short fifteen minute trip, it would only dock me a few points. I feared that my score would suffer from the number of hard stops I perform going downhill on many of the Pittsburgh area's only vaguely flat streets, but that was not the case. I've spent three weeks using Automatic now, and my lowest scoring day only dipped down to 90. 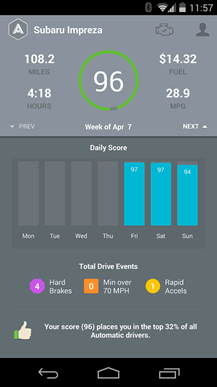 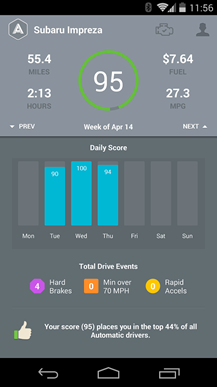 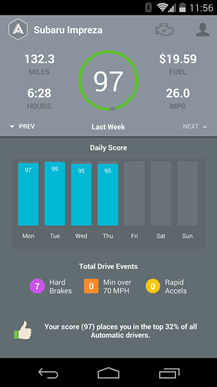 Automatic doesn't allow you to compete with friends directly, but it does compare your score to all other drivers who have registered an account with the service. The competition is pretty fierce, with scoring 95 points only being enough to rank in the top 44%. Clearly the people who purchase Automatic tend to take its advice seriously.

The app also shows where your car is parked, or more accurately, where your car was when it last synced. On the possibility that it misses a trip, which has happened twice for me thus far, it could show your car as being miles away from where it actually is. The map doesn't zoom in far enough to help you pick out the car in a parking lot, but it can at least point you towards the right area in the instance that you've walked across town since parking.

A more interesting use of the map is having quick access to views of your previous trips all placed in one place. Don't remember which grocery store you went to on Tuesday or where that new car wash you found was? Just check the app. 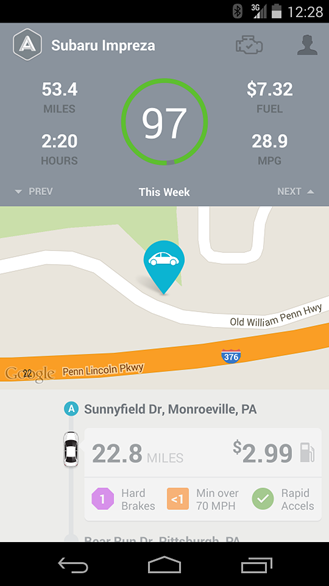 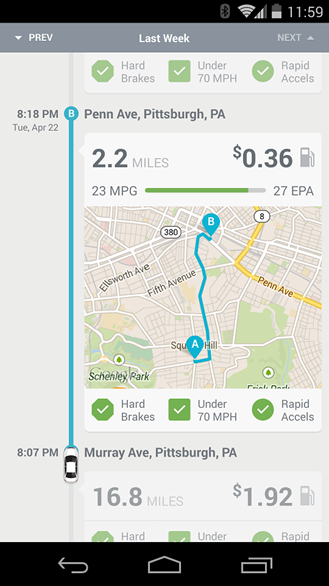 Automatic is able to read your "Check Engine" light, but fortunately I was unable to test this feature. If an issue were to come up though, the app should describe the problem in plain English. From there, you can hit the button at the bottom of the page to search for nearby mechanics. It will show some nearby options and provide numbers for easy calling. It seemed to overlook many of the mechanics I've seen in the neighborhood, but I guess having some options displayed in an emergency is better than being stuck with none at all. 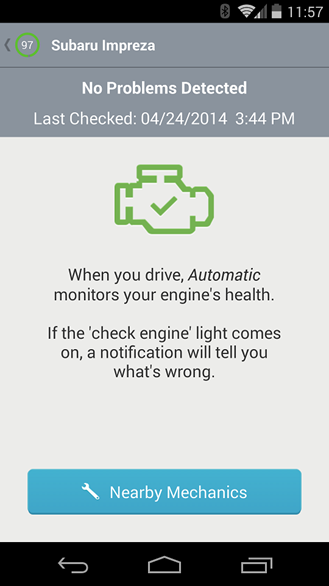 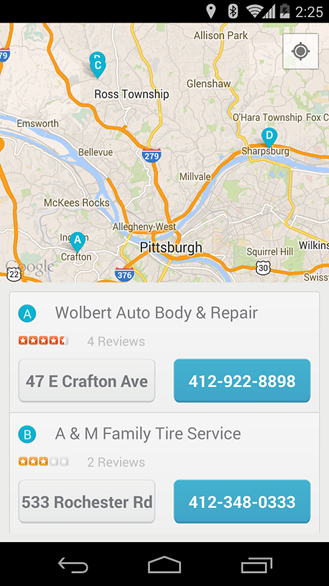 Speaking of emergencies, Automatic will eventually offer the ability to automatically dial 911 and notify family and friends in the event of a crash. Yet at the time of this review, that feature remains in beta for iOS and is not yet available for Android.

It's worth noting that Automatic does not update while driving, so there's no reason to look at the phone while on the road. This app is not a dashboard supplement by any stretch of the imagination, so don't expect it to display MPG, RPM, or anything of the sort. This is not that kind of tool.

Despite the relatively high price (as far as Bluetooth OBD2 adapters are concerned), this is not a tool for car enthusiasts. Really, there are only two settings you get to tweak within the app. One is the ability to disable any of the Link's three audio cues. The other is the choice to show an item in the notification drawer, which should make background syncing more reliable on devices running Android 4.4. or higher. It's a little annoying, but in an app like this, steady syncing is a must. You're better off playing it safe than sorry. 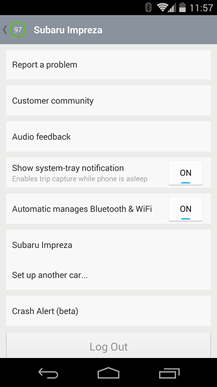 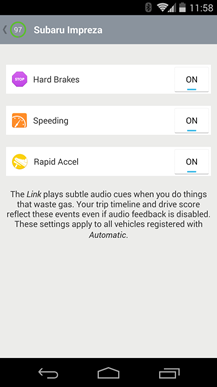 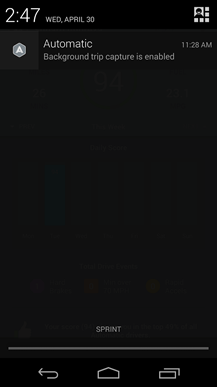 At $99.99, it's difficult to pinpoint precisely who should buy the Automatic Link. Even if the product will potentially pay for itself over time, only a relatively dedicated person will stick with it long enough for it to do so, and such a person is more than likely going to have more than a passing interest in cars. Yet full-blown car enthusiasts will be disappointed by the app's lack of configuration or power. What you see is what you get, and the few stats displayed here pale in comparison to what's offered by Torque, the pro version of which goes for just $4.95. Even next to Dash, Automatic's feature set looks pretty bare, even if it does have its own IFTTT channel with a set of cool, car-related triggers.

But Automatic isn't going after consumers who are dedicated enough to put together their own solution (even if the process for doing so couldn't get much simpler these days). Automatic is a basic out-of-the-box experience that just works, something a person can buy for a friend or family member knowing that the hardware and software are both included, and the companion app will require zero configuration on their end.

And to be honest, Automatic is really good for what it is. This is the type of product that changes people. No, it won't make them attractive or hide the least bearable aspects of their personality, but it can at least turn them into better drivers. Through effective use of beeps, an engaging scoring mechanism, and a straightforward Android app, the Automatic Link does deliver on its promise of saving gas, but only for those willing and ready to play by its rules.

Even when driving other vehicles, I now hear the Link beeping away in my head whenever I brake too hard. I've become a more cautious driver, one more focused on driving smoothly than quickly, and one who doesn't mind saving a buck in the process. I think that's worth the money, but as always, your mileage may vary.