The titular beach bum in Beach God doesn't have a name, but he looks like a Chad. I'm going to call him Chad. Chad is hoping to impress the voluptuous ladies strolling past his tiki bar, using the time-honored technique of flexing his biceps and pectorals. His motivation might not be entirely lust-driven, because if just one of the ladies passes him when he's not flexing, he literally dies of embarrassment. 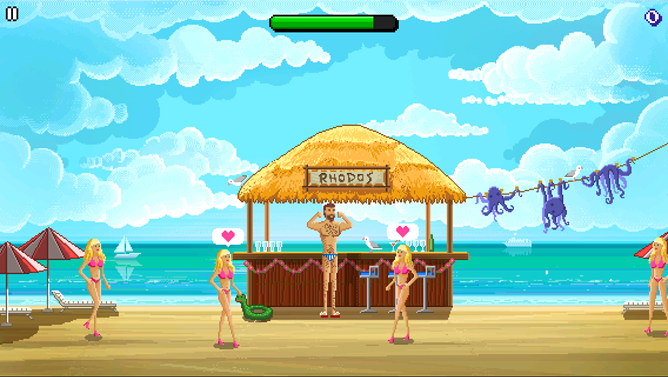 But here's the rub: Chad also dies if he flexes for too long, presumably collapsing into a pile of bones because he just couldn't handle the strain. Since the beach is littered with a never-ending procession of identical pixelated hotties, he's in quite the pickle. He can take a rest in the brief time when an oncoming lady doesn't spot him... if another coming from the other direction isn't already looking at him. Death, either from the shame of being tormented by a bikinied blonde or from oxygen deprivation, is inevitable.

Beach God has that annoying, simple, one-more-try quality that hooks people into games like Flappy Bird. And with a single-tap design, it's easy enough to squeeze in a few rounds just about anywhere. The game uses the worn-out pixelated visual style, but since the developer seems to be more self-aware than most indie devs ("incredible 16-bit graphics that will appeal to your inner hipster") I'm willing to overlook it. Beach God is free with no in-app purchases.