Look, this story is about 450 words long. But you don't have time for all that. Here's the skinny: if you fancy yourself a fan of strategy games, and if you've got a reasonably powerful Android machine with about 4GB of free space, aaaaand you don't mind paying ten bucks for a mobile version of a game that was fifty bucks when it debuted two years ago, then you should go buy XCOM: Enemy Unknown right now.

Still need convincing? Alrighty then. XCOM: Enemy Unknown first showed up on the major gaming platforms in October of 2012. It's a modern revival of a much-loved series of classic PC strategy games, layering fancy new graphics and a much-improved interfaced over turn-based strategy, where you move soldiers around a grid and face off against a variety of aliens throughout a long campaign. Your decisions about troop movement and fire orders are given extra weight, because if a soldier dies, he's dead - it doesn't matter if he's a raw recruit or a seasoned veteran.

In between missions you manage your base, making tough decisions about facility layout, research priority, and appeasing the various nations that contribute to your budget. If you ignore a member nation for too long, they'll withdraw from the project, making your base and your fighting force less effective. The basics of XCOM should be easy for anyone to get into, but make no mistake: this is not a forgiving game. It's entirely possible to get into an unwinnable strategic position, with the only option being a complete restart.

XCOM: Enemy Unknown was released for the iPad last summer to almost universally positive reviews. Keeping in mind the limitations of bringing a full AAA PC game to mobile platforms, it's amazing how much of the gameplay has been preserved. Aside from an understandable dip in graphics, some of the campaign maps, the multiplayer mode, and the DLC, the tablet version is essentially the same game. Reviewers also praised the touchscreen controls on iOS. 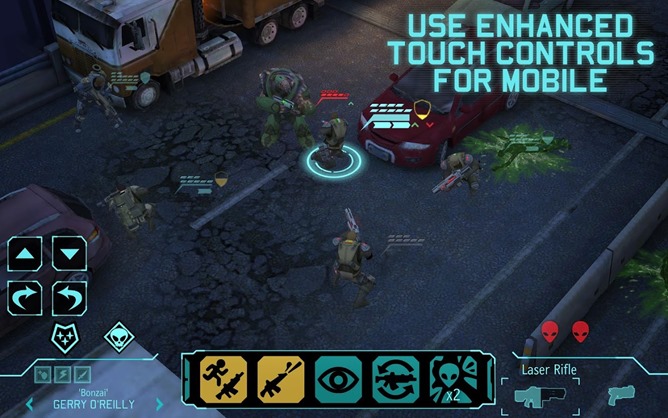 The game is a whopper, requiring 3.6 gigabytes of free space. Hardware support seems a little spotty, too: In my hardware list, my G Pad 8.3, Nexus 7 2013, Nexus 5, and DROID MAXX are compatible, but NVIDIA's SHIELD and the original Nexus 7 aren't. (I get the feeling XCOM is intended for tablet play anyway.) Cautious gamers might also want to hold off on a purchase until the first couple of updates - console publishers do not have a good record when it comes to making stable initial releases on Android.

If none of that dissuades you, XCOM: Enemy Unknown is $9.99, half the cost of its iOS version. There are no in-app purchases. The game should be available in the Amazon Appstore soon.