Update: Google Says the link to purchase Glass is supposed to be for Explorers who were already waiting from last week when the device was out of stock. Still a bit odd that a public link was the best way Google could think of to do that. (Thanks, +Rafael Morales)

Apparently that one-day Glass event earlier this month was just a trial run for something much bigger – Google Glass is now public. The Glass store is accessible to everyone with the Explorer Edition still selling for $1500. This could (finally) signal big things for Glass.

Most people who were interested in buying Google Glass have probably already snagged an invite by now, but having it on sale to the general public is an important milestone. It's kind of like a real product now. Your $1500 purchase gets you the Glass itself, a cable/charger, mono earbud, pouch, and your choice of free shades or prescription frames. 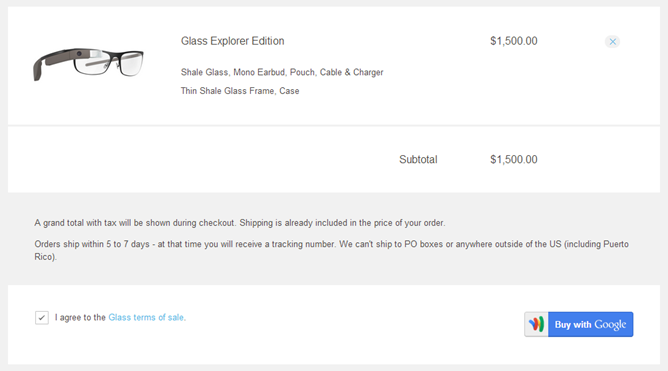 Keep in mind this is the same device Explorers have been using for the last year, so the only thing that's new is that you can buy it without an invite. An updated version of Glass is expected at some point, but that might still be a way off with the Explorer Edition price unchanged. Keep in mind this might be a US-only deal.