Better late than never, right? Though the first update for Sprint's variant of the Samsung Galaxy S5 isn't a hugely important one, at least according to its own changelog, some users over at XDA were eagerly awaiting it. It appears that at least some users are now getting the update. In the nature of these things, it may take a bit of time to get around to all the S5 owners on Sprint. 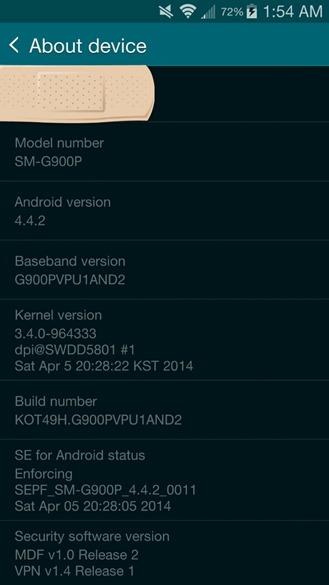 According to the changelog on Samsung's support site, the update fixes errors in the camera, alarm, and email apps. Specifically, the initial ROM had a bug that would not allow users to open the camera app while on an active voice call. Another issue arose from deleting alarms, or when moving emails from one folder to another. Whether or not these problems have been satisfactorily addressed, we can't say (since we don't have a Sprint S5 handy).

The update is a modest 41MB, and rooted users need not apply. If you've got a Galaxy S5 from Sprint, you know what to do: check your Settings menu for an over-the-air update. Or don't - it will come to you eventually.

Update: Sprint posted its own changelog just after this story was published, and Samsung followed suit with an updated changelog of their own. It looks like the extra time has been put to use: in addition to the changes laid out above, a few fixes for the new S-View cover have been implemented, and Google Search results have been removed from the S-Finder search app.