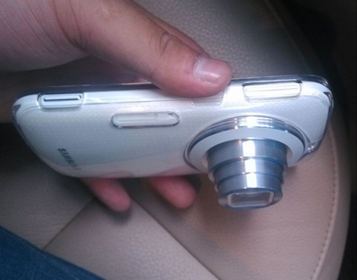 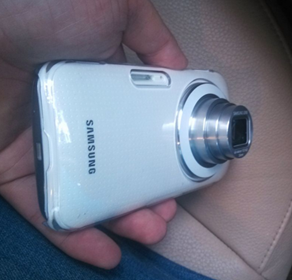 Readers will recall that Samsung has set a press event for April 29th in Singapore, coyly including "K" imagery and the phrase "Kapture The Moment" on the invitation. It's not over till the fat lady sings, but it certainly looks like this is the upcoming addition to the Galaxy line. According to PhoneArena, the Galaxy K will have an impressive 20MP camera with a 10X zoom lens and a true Xenon flash, though the front-facing camera is a mere 2MP. Inside will be an Exynos 5 Hexa processor, 2GB of RAM, and a 4.8" AMOLED screen. The source says that it will run Android 4.4.2 at launch, which seems about right, since the S5 does the same.

The physical design seems to match a previous (and likewise unsubstantiated) leak, though we still haven't seen the screen of the device, so I suppose it could just be a camera. Note that there appears to be a clear plastic cover attached in these new photos. We'll see if these leaks bear out after Samsung's event next week.