Guys, the final piece of the puzzle is now in place: Amazon just announced that FireTV will be getting HBO GO. Since it launched without the service, it raised the question of whether it would ever be available to FireTV users; it looks like Amazon was just busy inking the deal with HBO, because there's actually even more to this story than that. 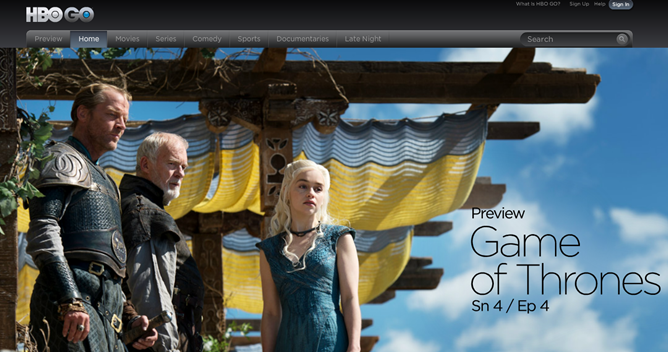 Not only will GO be coming to FireTV, but Amazon now has exclusive multi-year rights to certain HBO shows that will be available on Prime Instant Video. This marks the first time HBO has loosened its deathgrip on its own content, allowing it to be streamed on an outside service. Of course, the newest stuff out there will still remain exclusive to HBO and HBO GO; only certain shows will be on Instant Video, with certain seasons of those shows making the cut. Users can expect the following:

According to the PR, it sounds like "early seasons" can be described as anything that is older than three years. Shows like Girls, The Newsroom, and Veep will also be making their way to Prime Instant Video eventually, also after hitting the three-year mark.

The first HBO shows will begin making their way to Amazon's video service beginning on May 21, though it sounds like users will have to wait a lot longer to get HBO GO on FireTV – that's slated to happen sometime "before year's end." Good thing you have a Chromecast, right?

SEATTLE--(BUSINESS WIRE)--Apr. 23, 2014-- (NASDAQ:AMZN)—Amazon.com, Inc. today announced a content licensing agreement withHBO, making Prime Instant Video the exclusive online-only subscription home for select HBO programming. The collection includes award-winning shows such as The Sopranos, Six Feet Under, The Wire, Big Love, Deadwood, Eastbound & Down, Family Tree, Enlightened, Treme, early seasons of Boardwalk Empire and True Blood, as well as mini-series like Band of Brothers, John Adams and more. Previous seasons of other HBO shows, such as Girls, The Newsroom and Veep will become available over the course of the multi-year agreement, approximately three years after airing on HBO. The first wave of content will arrive on Prime Instant Video May 21. This is the first time thatHBO programming has been licensed to an online-only subscription streaming service. This programming will remain on all HBOplatforms.

In addition, HBO GO will become available on Fire TV, targeting a launch by year-end. HBO GO is HBO’s authenticated streaming service offering subscribers instant access to over 1,700 titles online including every episode of new and classic HBO series, as well as HBOoriginal films, miniseries, sports, documentaries, specials and a wide selection of blockbuster movies.

“HBO has produced some of the most groundbreaking, beloved and award-winning shows in television history, with more than 115 Emmys amongst the assortment of shows coming to Prime members next month,” said Brad Beale, Director of Content Acquisition for Amazon. “HBO original content is some of the most-popular across Amazon Instant Video—our customers love watching these shows. Now Prime members can enjoy a collection of great HBO shows on an unlimited basis, at no additional cost to their Prime membership.”

“Amazon has built a wonderful service—we are excited to have our programming made available to their vast customer base and believe the exposure will create new HBO subscribers,” said Charles Schreger, President of Programming Sales for HBO.

“As owners of our original programming, we have always sought to capitalize on that investment. Given our longstanding relationship withAmazon, we couldn’t think of a better partner to entrust with this valuable collection,” said Glenn Whitehead, Executive Vice President of Business and Legal Affairs, who along with Schreger headed up HBO’s negotiating team. “We’re also excited to bring HBO GO to Amazon’s Fire TV. The features like unified voice search will provide a compelling experience for HBO customers.”

Beginning May 21, Amazon Prime members will have unlimited streaming access to:

The multi-year deal will bring additional seasons of the current series named above, along with early seasons of other series like Girls, The Newsroom and Veep to Prime members over the life of the deal.