One of the more far-reaching Android Police stories this year was our exclusive write-up of Virus Shield, an impressively popular anti-virus app that managed to make it to the top of the Play Store's sales charts in less than a week, despite the fact that it did absolutely nothing. After digging into the app's code, Artem Russakovskii and various Android Police readers found that it was nothing more than a few images and a toggle. Virus Shield racked up more than 10,000 downloads at $3.99 a pop, and the app was removed from the Play Store hours after our story was published. 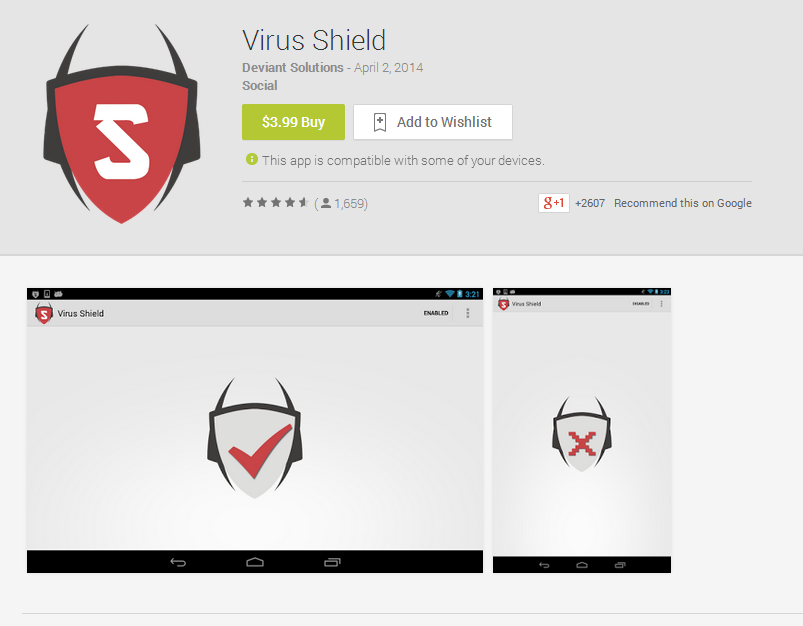 It looks like Google is eager to make amends for allowing a fake app to rise so high in the Play Store. Despite the probability that a large portion of the app's purchases and reviews were fake, Google is issuing full refunds to those who purchased the app, extending well beyond their usual refund window. By way of an apology, they're also giving $5 of Play Store credit to anyone who paid for Virus Shield. The following email was sent to those who purchased Virus Shield during the brief time that it was available:

We're reaching out to you because you recently purchased the “Virus Shield” app on Google Play.

This app made the false claim that it provided one-click virus protection; in reality, it did not.

Google Play's policies strictly prohibit false claims like these, and in light of this, we're refunding you for your "Virus Shield" purchase. You should see funds returned to your account within the next 14 days.

Additionally we'd like to offer you $5 promotional credit1, which can be used to purchase digital content on Google Play such as apps, games, books, music and movies.

Your credit redemption code is XXXXXXXXXXXXXXX. Click or tap here to redeem. For help redeeming, please visit our Help Center.

We're sorry for any inconvenience this may have caused; rest assured that we're always working to make Google Play better for our users.

I wrote the initial post with Artem Russakovskii's breakdown of Virus Shield, and downloaded it to get screenshots for the article. Despite the fact that I returned the app in time to get my $3.99 back, Google sent me a credit as well.

While it's still somewhat distressing that Virus Shield was allowed to make it to the top of the Play Store's sales charts (again, probably via gamed purchases and reviews), it's certainly encouraging to see Google make amends in such a positive way. We'd like to see some more demonstrable evidence of Google's efforts to remove fraudulent apps from the Play Store, but the refunds and credit definitely show a willingness to improve their products.

Note: the developer of Virus Shield has claimed that the app is legitimate, and that a version without the virus protection included was uploaded to the Play Store by mistake. He claims that he removed the app from the Play Store himself before his developer account was suspended. We seriously doubt these claims, especially in light of the developer's questionable history on other web services.

OnePlus One Hardware Leaked In Photos, Along With CyanogenMod 11S Screenshots