There have been a lot of leaks lately, and they don't show any sign of slowing down - Yoel Kaseb (via Google+) has shared screenshots of what he claims to be a test build of a redesigned Google+ app. According to his post, the build is unstable and probably unfinished, and he has since been locked out from accessing or using the APK. But what we can see from the screenshots Kaseb managed to capture is both compelling and in line with some of the other leaks we've seen recently. It may also be worth mentioning that Kaseb is verified on Google+. 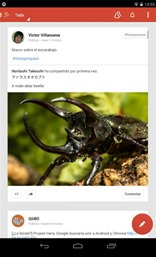 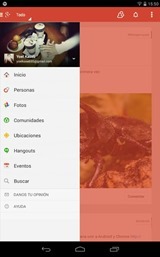 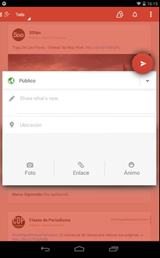 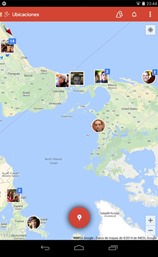 The first thing you'll probably notice is the colored action bar and circular button for new content. These are both elements we've seen in recent Gmail and Calendar leaks, where the "new content" button is just a plus symbol. The other notable feature is a red overlay in place of the current gray overlay. The "new post" interface also appears to float now, rather than going to a separate page inside the app.

We can't be certain that these shots are the real deal, but given what we have seen recently, they seem entirely possible. From the three app leaks we've seen so far, it seems fairly safe to assume Google will adopt this new circular content button in a variety of places. In the Google+ app specifically, it's a welcome change from the giant black share bar.

All of that said, a lot could change by the time any redesign rolls out to the public.