Google Maps/Navigation is fantastic. It's easy to use, stays (mostly) up-to-date, and is built into Android's core. However, it has one major flaw: offline navigation simply doesn't exist within Google Maps. If you're heading into uncharted territory where cell service may be sketchy or non-existent, you're basically on your own. And getting lost is not a fun experience.

The solution? A third-party GPS application with offline support, like Sygic's Maps & GPS Navigation. And for a limited time, Sygic is offering a handful of its maps for half price:

Those are some pretty substantial savings across the board, especially for anyone in need of an offline-supported GPS app, and all the packages come with free updates for the life of the application.

For a full listing of maps included in the World package, check out Sygic's website.

The app features high-quality maps with a couple of different viewing angles, which aids in finding the correct location, even throughout a convoluted street layout. If a situation arises when the first set of directions isn't going to work out – in case of construction, an accident, or the like, for example – Sygic also offers two alternative routes by default. If something happens in the middle of the route and you need to make a detour, Sygic allows for drag-and-drop route editing, so changing roads on the fly is a snap.

It also offers all the goodies one would expect from a good GPS, like turn-by-turn voice navigation, spoken street names, and the option to avoid tolls, among others. For those who may like to get to their destination a little quicker by bumping the speed up, Sygic keeps an eye out by giving warnings for excessive speed, fixed speedcams, and crowd-sourced police speedtraps. That's good looking out.

For those looking to add a little more in the way of features, the app has an in-app-purchase system that offers a handful of add-ons, like points-of-interest courtesy of My Sygic, integration with TripAdvisor, Book.com, and others; Groupon deal support, traffic info, and Park.me integration.

There's also a neat feature called "Heads up display" that essentially uses the vehicle's windshield to show a reflection of oversized, simplified content from the phone. Simply fire up heads-up and toss the phone on the dash. Done. 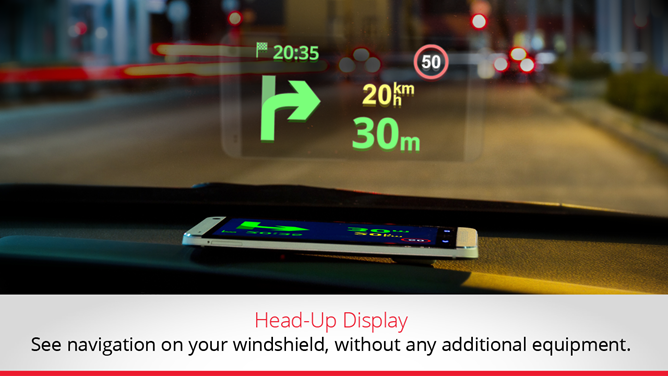 Another nice feature is that Sygic is optimized for use on both phone and tablets. If you'd prefer to use a larger screen for navigation, then running it from a tablet is the only way to go – and since it's all offline, a Wi-Fi tablet fits the bill perfectly.

This 50% off deal begins today and will only run for one week. It ends on April 22nd, so if you're in need of an offline GPS solution, now's the time to buy. If you're still not sold, however, the app offers a free seven-day trial – just enough time to figure out if it's what you're looking for before the deal ends.

Zombies, Run! Gets A Bright Red Holo Makeover For Big 3.0 Update And A New Season With Over 60 ...