Samsung has a press event up its sleeve for later this month, announced via the Samsung Tomorrow blog. As usual, there's not a lot of information contained in the invitation itself: it'll be at the Red Dot Design Museum in Singapore at 11 AM, which will be 11 PM Eastern Time here in the States. The tagline for the event is "Kapture the Moment," complete with intentional spelling mistake. 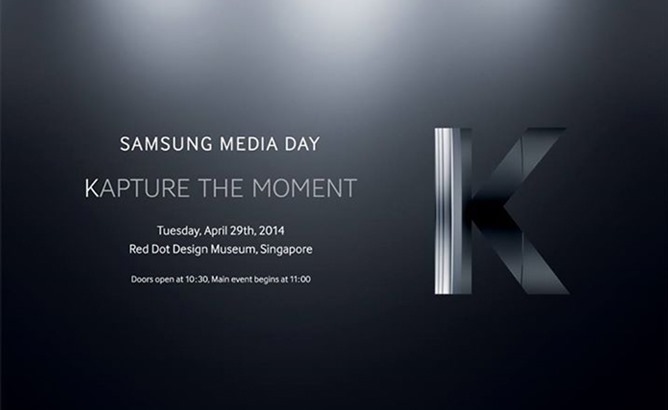 The zeitgeist is that Sammy will be announcing the second phone in the "Zoom" series, which began with the Galaxy S4 Zoom phone-camera hybrid. Some leaks have indicated that this device will be called the "Galaxy K" instead of the "S5 Zoom," eschewing Samsung's years-long habit of naming everything with an S (and explaining the awkward language in the invite). One unsubstantiated photo appears to be the back of the new device, showing off a point-and-shoot profile, but we haven't seen any more definitive evidence. Rumored specs include a 20 megapixel primary camera sensor, an Exynos 5 processor, 2GB of RAM, and a 4.8" 720p display.

Samsung's strategy of creating dozens of phones every year to satiate every possible market niche seems to be serving them well - they are selling more phones than anyone else, after all - so I wouldn't expect any significant shifts in approach there. We'll surely be seeing some kind of Galaxy Zoom update, K or S5, and probably a "Mini" version of the S5 as well. There's one phone that Samsung may not bring back for another product cycle, the Galaxy S4 Active, if only because that phone's waterproof function has been folded into the primary S5 design.

We'll be covering the Kapture the Moment event, naturally, and there will probably be at least one or two leaks before then.

Desktop Music Player foobar2000 Is Headed To Android By Way Of A Kickstarter Campaign [Update: ...