Samsung launched the Galaxy S5 in 125 countries yesterday, and launching alongside it were also the company's new trio of smartwatches - Gear 2, Gear 2 Neo, and Gear Fit. 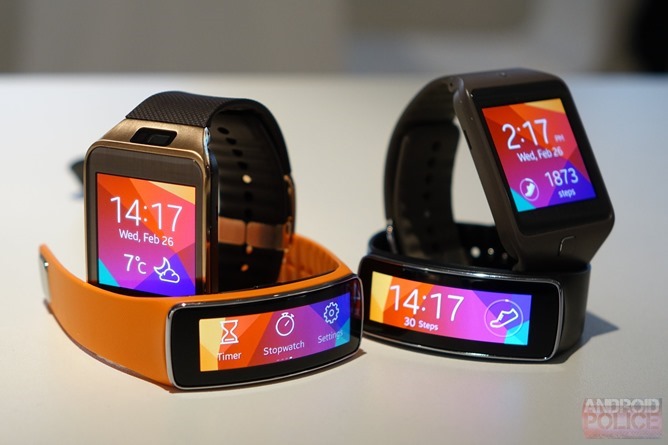 I've got a Gear 2 Fit review unit here, and I have to say, that curved OLED display is downright striking. This may be the most fashionable... thing Samsung's ever produced. How useful is it? Well, you'll have to wait for our review on that one.

The Gears seem almost destined to let down hardcore Android users, though, because just as Samsung was gearing up to launch its new smartwatches, Google went and announced Android Wear. Not to mention that Samsung specifically moved away from Android with the new Gear devices, as they all run the Tizen OS. (Tee-zen? Ty-zen?)

On the other side of the fence, Samsung's Gear OS really doesn't have any tight Google integration, and 3rd party development will happen on Samsung's terms, with distribution through the Samsung app store. It seems battle lines are being drawn here - Samsung couldn't have not known Android Wear was coming as the announcement of its new Gear devices drew nearer.

The new Gears aren't without any teeth, though - they can read your heart rate, count your steps, two of them can store up to 4GB of music for Bluetooth playback, they all have vivid OLED displays, and Samsung's increasingly powerful S Health app provides solid activity tracking integration right out of the box. But it's easy to see how Android Wear would have those consumers who are paying attention to the wearables market holding onto their cash for the time being, especially for Motorola's intriguing (and intriguingly ciricular) Moto 360.

So, we want to know: are you getting a Gear (or have you already)? Vote in the poll below.