We've all known the details surrounding the latest version of Samsung's flagship phone for several weeks, but now's the time to start getting our grubby fingers on one. Today Samsung has officially launched the Galaxy S5 in 125 countries across the globe, including areas in the US, Europe, the Middle East, Latin America, and Asia.

To sweeten the purchase, Samsung is including an exclusive copy of FIFA 14 with the device and the chance to compete (in-game) against the Galaxy 11 team. Some shoppers will view this as a goal, whereas others will shrug this off as more unwanted bloat. Either way, the gift is there.

The Galaxy S5 is joined by an army (okay, more of a tactical team) of wrist-bound accessories. There are three new Gear devices to consider: the Gear 2, the Gear 2 Neo, and the Gear Fit. For more on these devices, check out David's first impressions from this year's Mobile World Congress. The tl;dr here is that, if you're in the market for a Samsung wearable, you probably want the Fit. 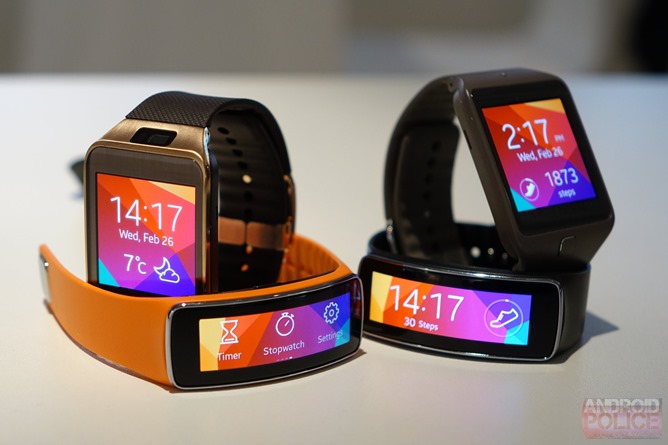 Here's what Michael had to say about the Fit back in February. When Samsung first introduced the combination smartwatch and fitness band, it only supported horizontal viewing. Now it supports vertical display as well.

There you go. Now's the time to start hitting up over 100 countries' worth of local carrier stores and websites to see how much they want before they're willing to part with one of these products. A full press release is available below.

SEOUL, Korea – April 11, 2014 – Samsung Electronics today announced the commercial launch of the new Galaxy S5 and the Samsung Gear devices – Samsung Gear 2, Samsung Gear 2 Neo, and Samsung Gear Fit. The newly launched devices are ready to be on the shelf in 125 countries including the US, Europe, the Middle East, Latin America, and most Asian markets.

“The refined design and technological innovation of our new Galaxy S5 and Samsung Gear devices are the direct result of Samsung listening carefully to what consumers wanted in the next generation of mobile technology.” said JK Shin, CEO & President of IT & Mobile Communications Division at Samsung Electronics. “We carefully crafted each device to offer a sophisticated, superior mobile experience that let consumers stay connected in their own way to focus on what really matters to them.”

Samsung Gear 2 and Gear 2 Neo
The Gear 2 and Gear 2 Neo have taken wearable technology to the next level acting as an extension of a consumer’s daily life with integrated fitness applications, a standalone music player, remote control feature and compatibility with a wide variety of Samsung devices. Both devices offer a slim, lightweight design in a mere 10 mm thickness. The Gear 2 is currently available in charcoal Black, gold Brown and the newly added wild Orange, while the Gear 2 Neo comes in charcoal Black, mocha Gray and wild Orange.

Along with the product launch, Samsung also released a new global TV commercial, “My Life Powered by Galaxy S5”. The TV commercial highlights how the Galaxy S5 delivers the capabilities that matters most to consumers and enhances lives by focusing on the relevant and meaningful benefits. The commercial was directed by Tarsem Singh, best known for his work on REM’s “Losing My Religion” music video, as well as films including Mirror Mirror, Immortals. The new TV commercial can be viewed at https://youtube.com/samsungmobile.

To further celebrate the launch of the Galaxy S5, Samsung is also offering Galaxy device users the exclusive FIFA 14mobile game. Available exclusively on the Galaxy S5 and other Galaxy devices starting April 11, users will have the unique chance to play against the Samsung Galaxy 11* team as part of a special partnership with EA SPORTS FIFA 14 mobile game. The Galaxy 11 team, which features world-class football players such as Lionel Messi, Cristiano Ronaldo and Wayne Rooney, will be available in the game’s Ultimate Team mode. Users can attempt to take down the best players in the world, who have also been tasked with saving Earth, for chances to win special FIFA 14 prize packs.

On launch day, Samsung will also provide consumers the unique purchasing experience at selective Samsung Experience Stores around the globe. Through this event, customers will be treated to a premium Galaxy blue carpet and enjoy a variety of exciting activities such as raffles, photo zones, “best dressed” contests, and a flash mob**.

* Galaxy 11 is a global, multi-platform marketing campaign that tells the story of top-class football players around the world in their attempt to save the planet from alien domination in a “winner takes all” match on a virtual football pitch. Revealed in a series of chapters in 2014, the campaign will be brought to life and offer engagement opportunities across Samsung Galaxy devices, online platforms and social media channels.

** Please note that activities may differ by store location.

[New Game] Disco Zoo From The Makers Of Tiny Tower Is... Well, It's A Zoo With A Disco In It