On the off chance you were looking for another reason to be annoyed at the big US carriers, you may have found it. According to Fierce Wireless, AT&T isn't the only carrier that opted to remove Download Booster from the new Samsung Galaxy S5 – both Verizon and Sprint have yanked Samsung's LTE-WiFi merging feature. That would make T-Mobile the only US national carrier that supports it. Update: We've been tipped that the US Cellular Galaxy S5 will have Download Booster as well. 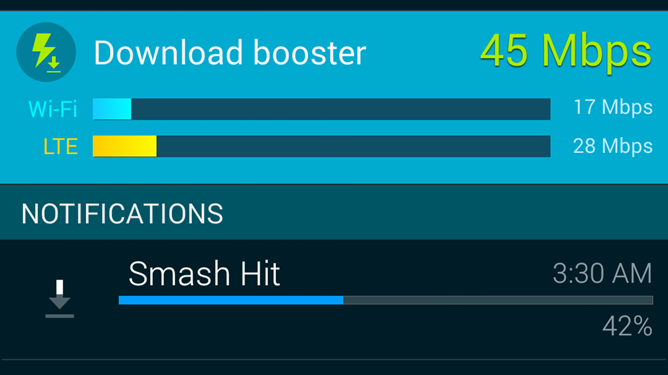 Download Booster kicks in when you are downloading files larger than 30MB, but only from supported sources like the Play Store and regular HTTP downloads. This feature ties the LTE and WiFi together and uses HTTP range requests to split the download up between both connections. By simultaneously grabbing parts of the file from both sources, you get a much faster downloads. However, it has the potential to use a lot of LTE data, which is probably what the carriers don't like.

AT&T said Download Booster was still being tested, and we've heard that it might show up in an update later. Verizon and Sprint haven't commented beyond apparently telling Fierce that the feature wouldn't be included.