We've reported on several Google Now-related rumors recently. If our information is accurate, Google Now will soon be able to help you remember and pay for bills, automatically infer events from your communications, and serve you reminders depending on who is near you. Today, we've got another one. This time, Google wants to help you remember where you left your car.

This rumor gets a confidence rating of 8/10. Points are deducted simply due to the unpredictable nature of pre-release features, and the fact that while there is teardown-based evidence for this, it is rather scant. Still, we are confident that this is probably going to happen, and is at least being worked on.

The rumor is fairly simple - Google Now will allegedly detect when you get out of your car, and attempt to remember that location for later, serving you a card with Google's best guess as to where you left your vehicle - including a location and what time you parked. Presumably, users will be able to hit the map on the card and navigate back to their car, though there's a button below the map that would seem to offer the chance to correct Google.

As we've stated before, we won't always share source images for unreleased software, for various reasons. We will however mock up functionality and interfaces as faithfully as we can, to communicate to you what things will look/feel like. That said, here is our mockup based on information available to us: 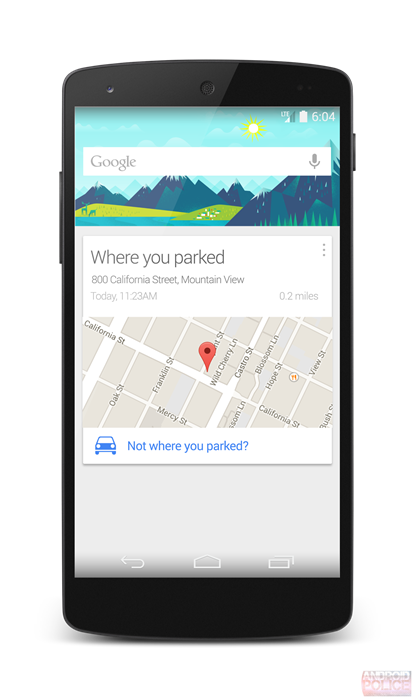 There are also a couple of code snippets to back up this functionality, small as they may be. The specific code that hints at parking reminders is a string that doesn't appear in the default strings.xml file of the APK, but does appear in four of the individual language folders.

Exactly how Google will choose to implement this isn't clear, but it is likely to involve activity features already built into Android. There are actually already apps (like Auto Finder or Valet) that use the activity recognition API and Android's fused location provider to automatically remember where you parked while running in the background.

Regardless of how it works behind the scenes, it's always nice to see a peek at what might be coming up to make Google Now even more powerful.

T-Mobile Unveils 'Simple Starter' Plan With Unlimited Talk/Text And 500MB Of Data For $40 As ...