In a bit of unexpected news, the Verge has just posted images and descriptions of Android TV, based on information provided to them by an unnamed source. 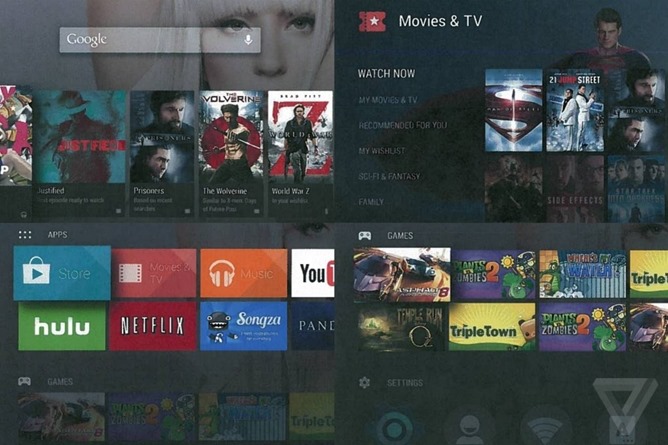 Android TV, according to the Verge, is Google's renewed bid for the living room, looking to put Google TV in the rear view mirror, and deliver content in a cohesive experience that users will actually want to do. It does this by focusing on being an entertainment platform, rather than making your TV function like a large tablet with a remote.

The Verge's documents evidently reveal that "major video app providers" are already building experiences for the platform, including Vevo, Netflix, Hulu, Pandora, and others.

The platform is evidently driven by simplicity, and Google is asking developers to create simplified interfaces for it. It relies on scrolling sets of cards, large visuals, and distinct typography and iconography to organize information. Of course the special sauce will be Google's predictive prowess - the Verge says Android TV will suggest content, and documents show that Google aims for three clicks or less between users and the content they want.

The platform also supports games, according to the Verge's materials.

So, what does this mean for Google's existing TV products? That plan is a little less clear. As with any leak, Google declined comment for the Verge on this story, but questions remain - for example, will Google TV units be able to receive an Android TV update?

As for Chromecast, it's likely that the dongle will coexist with Android TV, which itself will probably have casting abilities. The two products could well serve two different price points, providing tangential though not entirely similar experiences.