Google's Project Ara might be the very definition of a geek pipe dream: an idea that makes a lot of sense, but isn't quite possible with current technology, being made real with applied engineering and creativity. Even with Motorola being sold to Lenovo, the Ara modular phone project is still full speed ahead at the Googleplex under the new ATAP team. Dave Hakkens of Phonebloks, who presented a very similar concept back in September, was recently given a tour of ATAP's progress. He was kind enough to bring a video camera along.

From an engineering standpoint, the coolest thing in the early Ara prototypes is the system that keeps the modular hardware components in place. The prototypes use electro-permanent magnets, which are a magnetic system combining various materials that can hold a magnetic state without needing a constant flow of electricity. This system locks the modular pieces into place on the bare phone's frame, ensuring that they won't slide out until you want them to, even without a physical locking component. 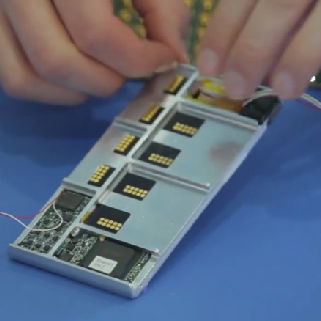 The video also gives us a sneak peek at an upcoming "Ara Configurator App," currently being co-developed by Google and Sosolimited. This app lets user configure an Ara phone with different hardware components and exterior design elements, sort of like a more complex version of the Moto Maker system (though the Configurator app was demoed on a phone). Presumably the app could let users design and order a completely customized phone quickly.

Ara is real, and it's really moving forward. Many thanks to Google and Mr. Hakkens for the regular updates.

[Bug Watch] In KitKat, Enabling Fast Scroll In Code Will Not Work On First ListView Load, A Fix ...