The Galaxy S5 is set to launch on April 11th, but eBay's ready to throw a bone out to the more impatient among us. As a part of today's Daily Deals, the site is offering an unlocked Galaxy S5 for $699.99. That's nothing to sneeze at by any means, but it's more affordable than the same phone at Negri Electronics, where it's going for $720.50, or Newegg, where it's listed at a whopping $799.99. 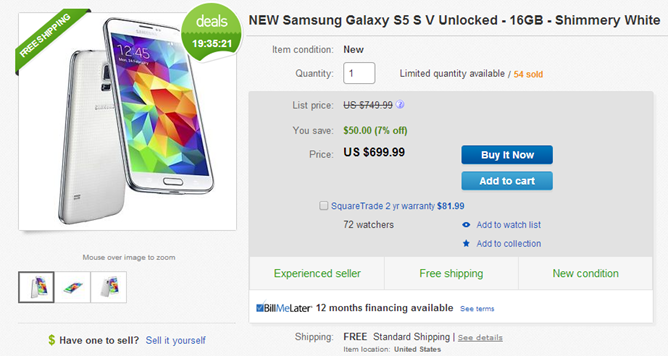 Those other retailers are offering the unlocked Galaxy S5 as a pre-order (with Newegg showing the phone coming on April 28th), whereas the eBay seller is apparently ready to ship one out within a day.

Waiting's hard, so here's a link for your convenience. There's still over 19 hours to go before the deal ends.

[Rumor] "Android Silver" May Be Google's Attempt To Finally Provide A Premium Android Sale And ...