There's a new version of Gmail making the rounds at Google, if a couple of leaked screenshots from Geek.com can be believed. Those shots describe a radical user interface change and a handful of new features. Whether they're real and/or final or not is up for debate - even the report notes that the organizational features are mostly experimental at this point. 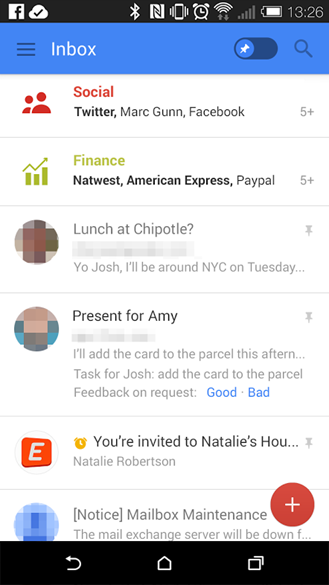 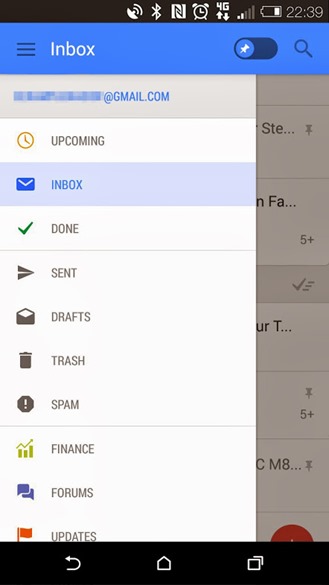 Aside from the new flat look to the user interface and Google+-style rounded profile pics, the biggest change comes in the form of a new inbox view, with a focus on organizing messages by content. Social, Finance, and Forum meta-tags seem to be automatically applied in this view, superseding standard messages and coming with their own unread counts. They also give a brief overview of new email recipients - check out the bolded "Twitter" text in the screenshot above. The standard "star" system for highlighting messages has been replaced with a pin, and it looks like pinned messages will automatically be placed above others in your inbox when the view is applied. (Note the pin slider next to the search button.) Pinned messages revert to a timeline view when un-pinned.

The action bar is gone, and now there's a floating "+" button at the bottom of the screen for new compositions. According to the report, the new app allows users to "snooze" messages for a variable period of time, from a few hours to several weeks. At least one message shows an alarm clock icon, which seems to suggest an automatic timer or deadline detection function.

Assuming that the screenshots are legitimate, the UI and organization are so different from Gmail's tried and tested system that the build is probably either entirely experimental or a long, long way away from release. We might see some of these features begin to trickle into the Gmail app (or the web version) over the coming weeks and months.