It's hard to believe that it's been a decade since Google first introduced Gmail beta to the world – a task that, at the time, the team behind the product had no clue would fundamentally change how we use email. According to an excellent piece on Time, however, Gmail is really a product that almost wasn't. There were times when the company questioned whether or not to release the product to consumers at all.

Really, that's not much of a surprise. Google was, at that time, just a search company. There was no Android, Google+, Google News, or anything else. There was only Google. That in itself, however, is one of the things that made Gmail great: since it was a search company's product, search was built into the very core of experience (which still remains true to this day). Gmail was a head-first dive into uncharted territory; one that would eventually change everything. 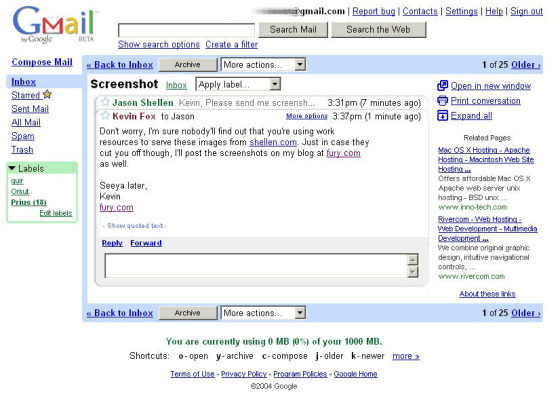 The first public version of Gmail, back in April 2004

The initial version of Gmail was built by one man – Paul Buchheit – and ran entirely off of a server at his desk. Implementing the search tool was actually the first thing he did, and from there he continued to add features. Compared to popular email services at the time – Yahoo and Hotmail – Buchheit knew that he wanted the Gmail experience to be more like a desktop application, such as Outlook. With this motivation, AJAX was born (though it wasn't called that at the time), and thus the platform for all web apps as we know them today.

But Gmail didn't emerge without controversy, mostly due to the fact that the search algorithm did exactly what it does today: read through incoming messages for keywords to intelligently place ads. At the time, this was unheard of, and Google caught a lot of heat for it. There were concerns of privacy and the like, but Google stuck to its position that it was doing nothing wrong. Fast-forward to today, and it's probably safe to assume most users feel the same way, especially considering the majority of ads are delivered in a very similar fashion across the web.

One of the most interesting points (outside of the ad targeting aspect) about Gmail back in 2004 was its incredible storage capacity – every user was offered 1GB of storage, which was an obscene amount at the time. Of course, the storage capacity has gone up as the need for more space has increased over the last decade. Gmail users are now offered 15GB of storage, which stays in line with one of Google's original intentions for Gmail: so users never have to delete anything. And to think, early adopters probably never imagined needing more than that single gigabyte.

Otherwise, while everything has become streamlined and prettier, Gmail fundamentally works the same way it did back in 2004. As many services have been redesigned, re-thought, and re-imagined over the years, Gmail has always been consistent. Sure, it's more robust and packing more features than ever before, but the basic gist is the same. It's a complex product that keeps everything simple and intuitive on the user-facing end.

Really, it just works. And there's no reason to change that.

[April Fools] Toshiba Reveals DiGiT - Another Fake Wearable Glove, But One That Gets It Right

[April Fools] The Chromecast Is Perfect For Squirrels, May Contain Nuts