Disclaimer: Android Police isn't responsible for any harm to your device - proceed at your own risk.
Note: WeakSauce is only for the Verizon variants of the HTC One M8 and M7. Every other carrier and international variant of the HTC One should be unlockable through HTC Dev.

The setup steps are incredibly simple. 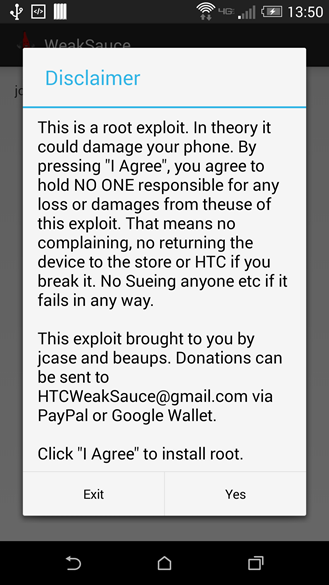 WeakSauce doesn't make a permanent change to your phone when it runs; instead, it automatically reacquires root each time the phone boots up. This can take up to a minute after the phone has booted before root is ready to go. A toast notification will show up when it's done. This also means that removing root is as simple as uninstalling WeakSauce and rebooting.

If you're working with the 2013 HTC One (M7), WeakSauce is a suitable root method for use with firewater, which can be used to get S-OFF. Once the phone is set to S-OFF, you have the option of installing a custom recovery and rooting with a more traditional method. You're free to uninstall WeakSauce after the phone has been permanently rooted. There isn't a suitable counterpart to firewater for the M8 yet, but the phone has only been available since Tuesday, it would be awfully optimistic to expect a full suite of hacks so soon.