Update 3/27/14: The guys at B & A Studio found a much more affordable way to manufacture the dock, so they cancelled the already-95%-funded project and opened a new one. As a result of the new manufacturing process, the company is now only seeking $13,000 (instead of the original $20,000), and the docks are down from $35 each to $19. That's a pretty massive savings – now you can essentially get two for the price of one original.

Desktop docks are nothing new in the mobile world, but finding a solution that can A) work on multiple devices, and 2) fit devices in cases can be a challenge. B&A Studio (a part of 2040 Design Studio – the company that brought us Capta, Vavo, MODO, and others) is looking to change the game with its new Arq Nesting Dock – a sleek-looking dock that works with essentially any microUSB or Lightning device.

The first thing to note about the Arq is that, unlike other dock that have attempted to work with a variety of devices, no pressure is put on the device's part or the connector. Instead, it uses movable pins to prop the unit up. Like so: 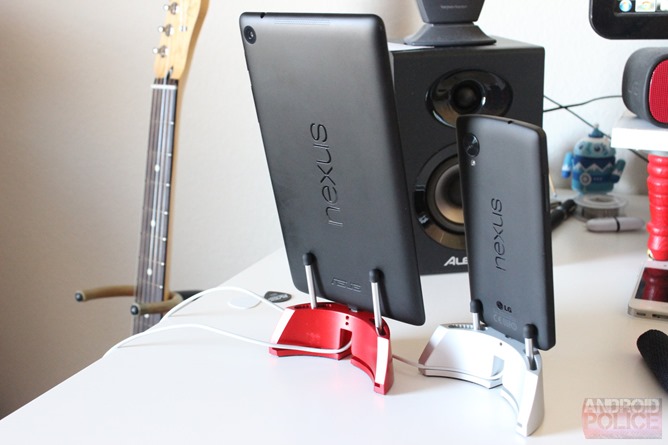 There are 10 different possible positions the pins can be placed in to proved a variety of thicknesses, which allows the dock to be used with a device in a case. The microUSB or Lightning connector can also be used in a variety of positions – everything from flush with the top of the dock to roughly nine millimeters up – making it compatible with a variety of device/case combos. B&A has done an excellent job of highlighting many of the potential scenarios in its Kickstarter video, so give it a watch to get a better idea:

The dock will ship with its own microUSB cable to ensure compatibility, as the ends of most others are too wide to fit in the slot. The cables are easily adjusted/changed with a small, included hex key to loosen the small screws in the Arq's back. Getting it adjusted for the first time can be a bit tedious if you're a perfectionist, but thankfully once it's set you shouldn't have to change it again, assuming you don' t plan on using multiple device with the same dock.

Speaking of multiple devices, the Arq is a nesting dock, meaning that one dock can "rest" inside of the another to create a sort of unified look. They don't physically attach to each other in any way, but each dock has PuGoo pads on the bottom so they stick to the surface below, keeping them in place. 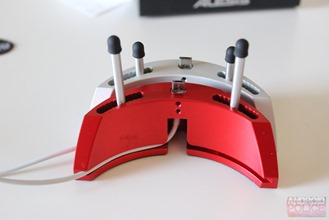 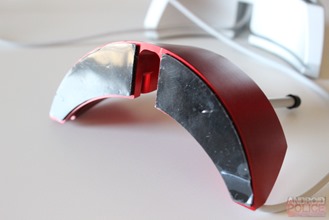 The primary downside that I found when playing with the Arq is that each dock must have its own cable and plug – there's no way to use multiple docks from a single outlet. Thus, if you have three devices and three docks, each one will need its own cable and AC adapter.

B&A is looking for a total of $20,000  $13,000 for Arq. Assuming it gets completely funded, the estimated shipping date is July of this year, which is essentially a four month turnaround. During the Kickstarter campaign, the docks are going for $35  $19 each (but get cheaper the more you buy), with the pledge plans reflecting that: one dock is $35, two is $65, three is $90, and so on. It will come in three different colors – red, black, and silver – and the user will be able to specify their preference once the campaign is over.

To help Arq reach its goal, and to find out more info about the product, check out the Kickstarter page. Also, to celebrate the launch of Arq's Kickstarter, 2040 Design Studio is having a flash sale on Qooqi, Capta, and MODO – all three are between 60% – 75% off, which drops the prices significantly (Qooqi is only $4!), so check those out if you're interested.