Mega-retailer Amazon has scheduled a press event for Wednesday, April 2nd in New York City. The press invitation teases the event with the phrase, "Please join us for an update on our video business from [Amazon Kindle VP] Peter Larsen." A background with a couch and a bowl of popcorn makes it clear that Amazon's sights are set squarely on the living room. 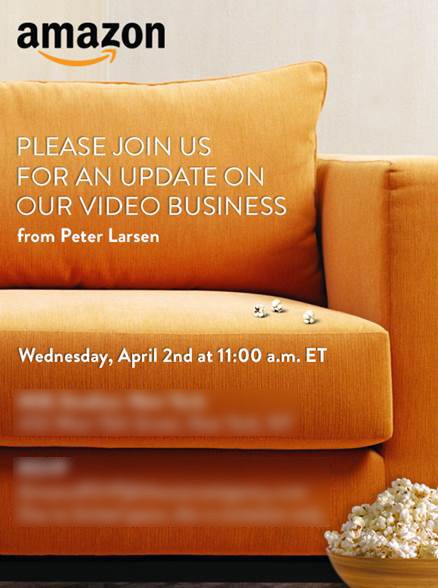 The Verge is fairly certain that the event heralds an Amazon-branded set-top box, a la Roku or Chromecast. That would certainly make sense, given the Amazon game controller we saw earlier this month. Said controller featured Android-style navigation buttons, which also jibes with Amazon's interests in Android as a software and distribution platform for the Kindle Fire series of tablets. Rumors of an Android-powered Amazon Instant Video streaming device for video and other TV-centric services have been circulating around the larger tech world for months, though we emphasize that the aforesaid controller is the only hard evidence we've seen so far.

Amazon has already made huge pushes towards the television for its Instant Video streaming movie and TV service. Amazon streaming apps are available for a variety of applicable platforms, including Roku, Google TV, various brands of smart TV, and every major game console. (Users can also stream Amazon video on iOS and all Kindle Fire devices, but not regular Android phones and tablets.) A branded streaming device, possibly running Android and selling apps via the Amazon Appstore, would be a relatively easy way for the company to boost its userbase. That's doubly true if it's cheap enough to compete with the increasing number of budget set-top boxes.

And who knows, maybe Amazon will finally make its Instant Video service available to Android useaahahahHAHAHA. No. They're not going to do that.