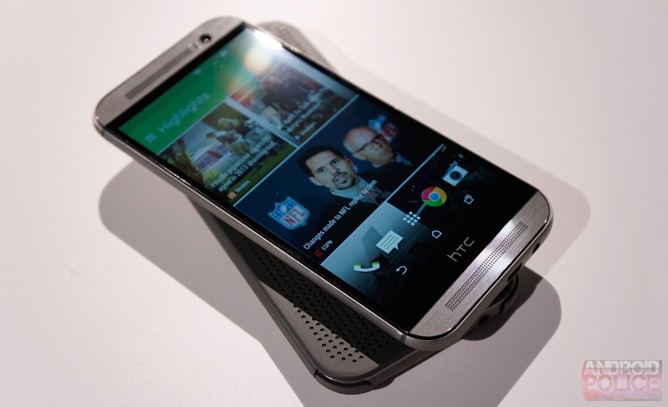 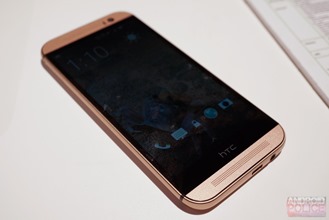 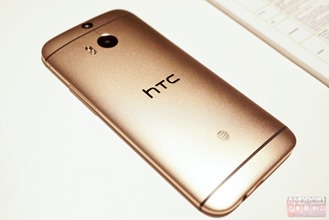 Seen at bottom is the Best Buy gold version

This, too, is a question we already had the answer to. The new One looks pretty much how it's looked since the deluge of leaks began, but here are some photos of it. If you have any specific questions related to the form factor, feel free to ask below and I'll answer as best I can.

The front of the device looks much like the original One, though HTC has opted for broader, softer curves this time around. Chamfered details around the edge and camera lenses. The device is dominated by its 5" display and surrounding black border (capacitive keys are gone but the bezel remains), blocked on top and bottom with HTC's now signature Boomsound speakers. 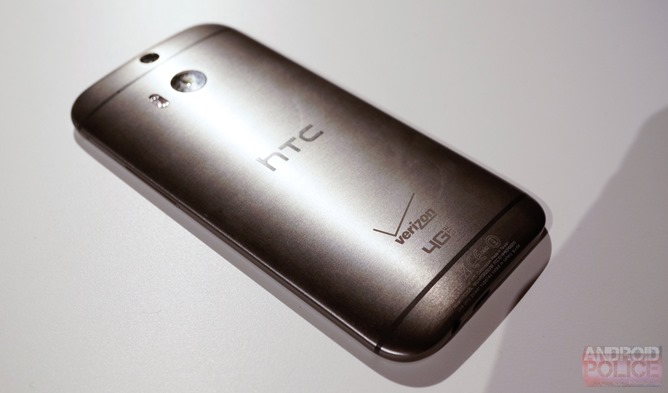 The back is more interesting. The curve across the back of the device also seems a bit softer, and the metal has a "gunmetal hairline" finish that makes it pretty comfortable to hold. Peter Chou explained (and Jonah Becker emphasized) during the event that achieving this finish wasn't easy on a curved surface, and that HTC went through a lot of failed finishes before getting it right, but it seems the manufacturer pulled it off just fine. The metal also wraps up the sides to the glass, though the top retains a wedge of plastic that hides the IR blaster.

The most noticeable element of the back side is the two cameras up top. Despite everything, the specifics of these cameras eluded leakers and the press entirely until today. 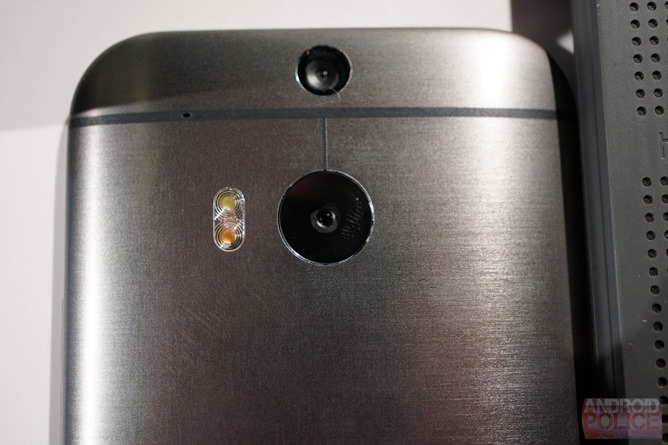 So, what's the real story with the cameras?

In Rogers' accidental product listing yesterday, the array was called Duo Camera, but aside from choosing the emphasis of a shot post-capture, it wasn't clear how exactly they worked.

For the first time, Chou says, the dual camera captures "true depth information." HTC opted to solve a problem they perceived at the hardware level rather than using software processing. That problem was the ability to choose focus after the fact.

The camera array does that by dedicating one sensor to capturing depth information according to HTC. It was explained as "understanding" whether an object or person is in the foreground or background, and blurring accordingly.

Presumably, this involves capturing multiple images at once and storing the information for later processing. In our hands-on time with the phone though, it seemed to cut off focus in definable blocks, with contiguous objects getting suddenly blurred at a sharp line.

This effect was less noticeable on more dynamic scenes with more subjects or background objects, though in a photo during the presentation, half a distant mountain was blurred while the rest was sharp.

The camera also boasts 300 millisecond focus time, a new camera "switcher" interface for switching shooting modes (including program or "custom" modes), the ability to pause while recording videos (for multiple cuts in the same file), and an enhanced Zoe UI making it easier to capture Zoes.

What's more, Zoe is getting a new web counterpart for accessing, editing, and remixing Zoes, allowing friends to add videos, photos, and music for further mashing. This feature is expected "this summer."

The new Gallery has a pinch-to-sort feature allowing for sorting by day, month, or year, and new "image match" for finding more images of people and making automatic albums of them. 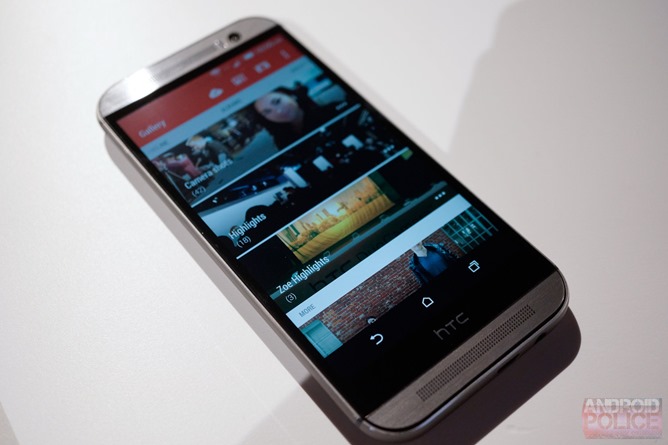 Of course with a new handset comes a new version of HTC's Sense overlay. We'll dive into the software aspect of the M8 fully in our review, but there are a few quick things to note here first.

Sense 6.0 according to Lead Designer Jonah Becker is "different than any other phone," emphasizing Blinkfeed's updates including a "spacious, clean, and colorful" layout while the service allows users to create custom feeds on any topic. Blinkfeed, according to Becker, will be opened up to developers to integrate their own content, with the SDK launching today.

Blinkfeed's new partners already include Foursquare and FitBit, which can show activity milestones and achievements directly in your feed.

Sense TV has also gotten an update, with expanded features for "the ten most popular sports," and further social integration. The IR blaster this app makes use of is actually concealed behind the black plastic on top of the phone.

For those wondering, Sense 6 will be coming to other members of the One family (One, One Max, One Mini) but details won't be coming until later this Spring.

Another one of the HTC One's big features that's getting updated in the M8 is BoomSound. HTC touted during its presentation redesigned speaker chambers accommodating speakers that are 25% louder, powered by a multi-band amplifier.

HTC also worked specifically with several manufacturers of audio equipment to make sure wireless playback was seamless. A simple three finger gesture allows users to fling audio to DLNA, Bluetooth, or Miracast devices, and the gesture works in "all" audio apps according to an HTC rep. The connectivity should theoretically work with any audio equipment capable of receiving it, but HTC does not guarantee the same seamless experience on output devices made by those outside HTC's testing partnerships.

HTC wants to let you avoid the power button with the M8. Its sensors evidently measure things constantly, "anticipating" what you want to do. It has gesture support with the screen off allowing you to get to your recent app or other apps with a swipe back and forth in the appropriate direction.

Taking a photo is as easy as turning the phone and pressing volume down. Press again to snap a photo.

The M8 also answers calls automatically when you lift the phone to your ear, and calls can be answered through HTC's dot view case which we'll discuss in a moment.

The M8's battery, according to HTC, has a 40% longer life than its predecessor. The phone of course has a normal power saver mode, but it carries an extreme power saving mode as well, which changes the phone's interface forcing users to manually check for calls messages and email, with up to two weeks standby time. The new interface is essentially a set of tiles for phone, email, messages, calculator, etc. 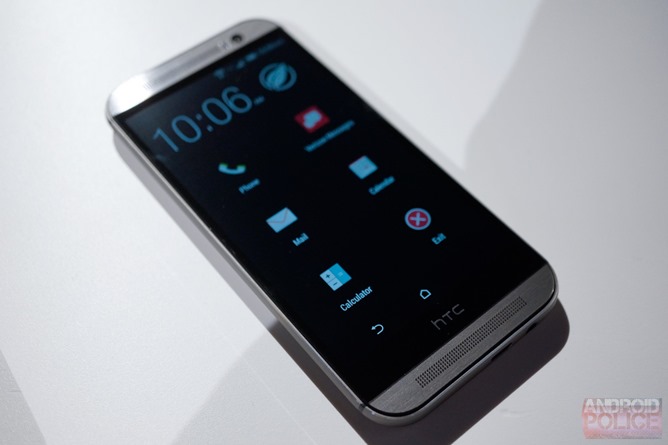 If there's such a thing as a flagship accessory, this is it for HTC's M8. The dot view cover is a case with a TPU cover around front made up of holes that come very close to poking all the way through. With a double tap, the phone will show a pixelated layout that appears on the cover as a "dot matrix" view of the time, weather, or notifications. If you're receiving a call you can answer it by swiping the cover, after it shows you who is calling. 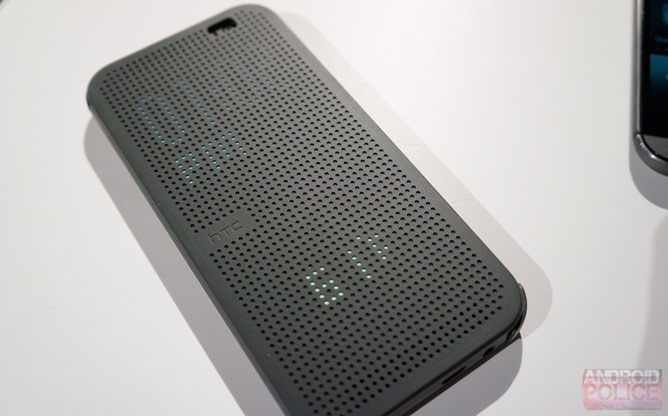 The dot view case will be available in a variety of colors, including blue, orange, black, purple, and teal. 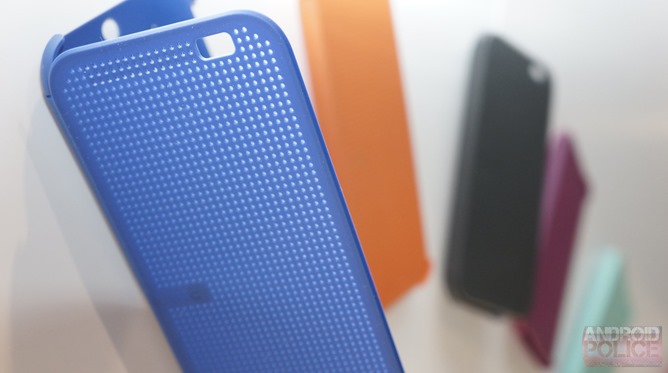 In my mind, while the M8 had very few surprises left by the time it was announced, it's still a fairly promising phone. The dual camera doesn't exactly seem to pan out from what I saw, but the photos themselves (without blur effects applied) looked pretty decent. There are certain to be more quirks, features, and information that will come out of the woodwork during our full review but at first blush the M8 seems to be a step in the right direction. 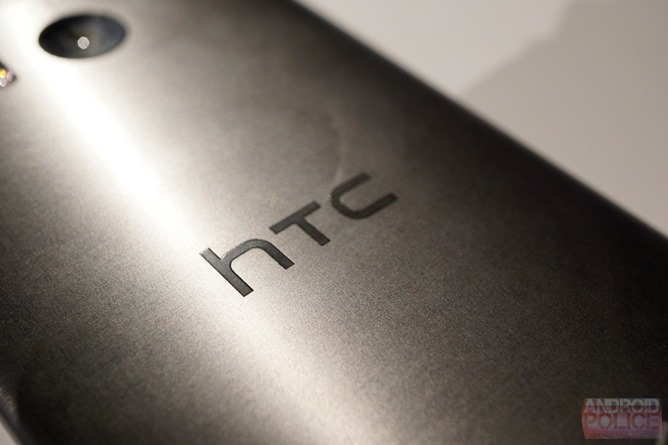 The Dot View Case For The One M8 Is In HTC's Store For $50, Not Available For Purchase Yet