Last month we posted an article examining some very significant changes to the way SD cards could be accessed and how Google's partner OEMs had begun enforcing these restrictions with Android 4.4. There can be no doubt, a lot of people were displeased to see their expandable storage crippled. While some have vowed to never update to KitKat, and others have turned to custom ROMs that don't enforce the same rules, there are still many people that still want to have the best of both worlds. Thanks to SDFix by developer Tod Liebeck, it's possible to restore the SD card to its former glory on a rooted stock ROM in just a few seconds. 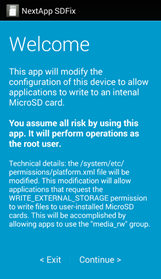 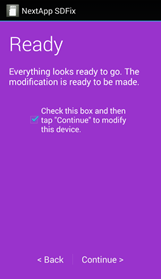 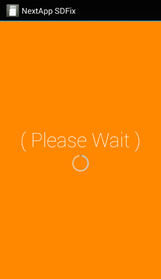 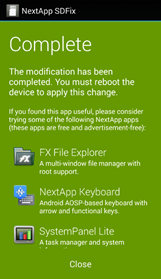 SDFix is a very quick and painless app. Simply install, tap through a couple of screens, and reboot. It works by modifying the WRITE_EXTERNAL_STORAGE permission in platform.xml so that apps with this permission automatically become part of the media_rw group, which has write full access to the entire SD card. This workaround may already look familiar because it's the same thing many OEMs and custom ROM developers have been doing for a few years. Of course, you could manually make the same change on your own, but the app is probably a bit more convenient.

Note: apps that write to their protected folder on the SD card will lose the small amount of security that they might have expected. (Hey, it had to be mentioned.)

Once SDFix has finished making its changes, a backup is created with the name platform.xml.original-pre-sdfix. Reverting to the stock behavior can be achieved by using a file manager with root access to replace the modified platform.xml with the original. Since these modifications are otherwise permanent, the SDFix app can be safely uninstalled after it is finished.

If you're dying to get back some of the flexibility of your SD card after updating to KitKat, grab SDFix for free from XDA or the Play Store. Remember, root is mandatory. 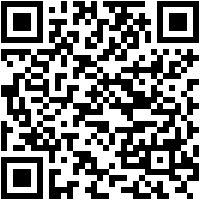