If you're interested in Samsung's new oversized Note PRO or Tab PRO 12.2 devices, it's more than likely because you want to get more done on that beautiful and massive 12.2-inch display. In order to make that happen, you'll need a little bit more than just the tablet, and Logitech has already released a keyboard for the job: the Logitech PRO keyboard/case.

At $130 (plus the $750-850 for the tablet), however, you have to ask yourself at what point you stop wanting a tablet and start wanting a laptop or some sort of hybrid/convertible device. 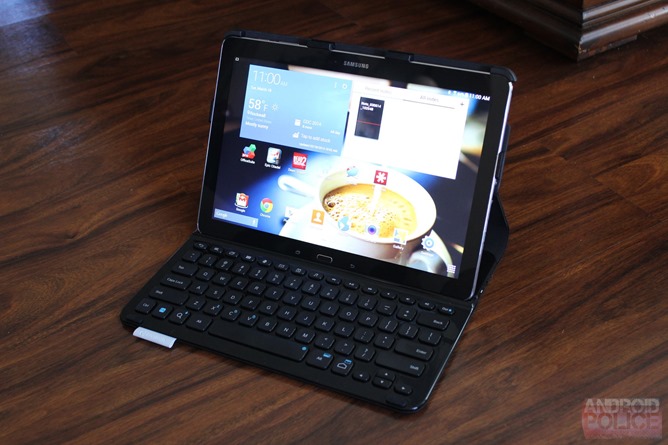 The PRO's design isn't really anything out of the ordinary for a product like this - especially one coming from Logitech. The tablet slips into some clips on the top of the unit, which firmly hold it in place while still leaving access to all the ports, buttons, speakers, and S Pen. The keyboard features a groove of sorts where the tablet rests, making it easy to set up, but also limits it to one viewing angle. The design also makes it basically impossible to use on your lap, as the tablet easily falls out of the slot if not on a flat surface. Given the size and multi-tasking nature of the Note/Tab PRO tablets, I would to like have seen a more laptop-like design from this case, perhaps similar to Zagg's Folio Keyboard for the Galaxy Note 8.

Aesthetically, the Pro has a pretty classy and professional look about it. The top third of the unit (where the tablet's camera is) is covered in what appears to be faux leather, while the rest of it is basically a black canvas-type material. Logitech states that the case will protect the tablet from bumps, scratches, and even spills - though the latter of course will only apply if the liquid hits the cover and not the exposed parts of the tablet, so that's slightly misleading.

The overall build quality of the PRO is good - the keys are very stable and the whole thing feels really solid. No creaking or popping, as everything is quite rigid. All the seams also seem to be strong, and I would expect them hold up for the fairly long term.

Typing on the Logitech PRO is a good experience, as the large-sized tablet makes for a full-sized and very comfortable keyboard. The island-style keys are great, and it is probably one of the best mobile keyboards I've ever used in terms of typing comfort.

That said, there are a few areas that need improvement.

There are several Android-specific hotkeys present on the keyboard: back, menu, recent apps, app tray, web browser, email, calendar, music, track controls, volume controls, search, and home. Aside from the dedicated row of buttons, it also has a series of function keys for cut, copy, paste, keyboard toggle, voice actions, notification panel toggle, and screen lock. Functionally, this keyboard can do basically all of the essential tasks without having to actually touch the display.

This is the NotePRO 12.2 and keyboard case next to my Lenovo Thinkpad Yoga. They're basically the same size.

When it comes to battery life, Logitech says the PRO keyboard gets about three months of battery life. I've only had it for a couple of days, so I can't say if that's true or not... but I have no reason to think otherwise. Devices like this generally get excellent battery life, so that's not something you should ever have to worry about. Just charge it every other month or so and you're covered. That's six charges a year. Surely that's manageable. 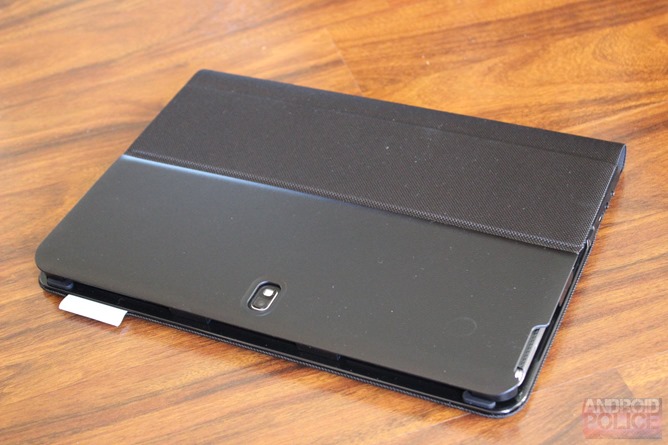 At $130, the Logitech PRO is a pretty pricey keyboard option - especially for one that doesn't offer backlighting and only has one position for the tablet. However, it's an extremely comfortable and usable keyboard - the keys are large and tactile, and it has loads of Android-specific hotkeys. It's a great match for Note or Tab PRO 12.2 devices, and really gives these workhorse tablets more of a laptop-like feel and function. But that in itself is the sticking point - given the new PRO series tablets' price range ($650-850, depending on model), you could easily just get a hybrid/convertible laptop for roughly the same price as the tablet and keyboard, which would run about $780 at the absolutely cheapest point. Opt for the higher-end Note PRO and you're at just under $1000 for the set.

That's a lot to pay for an Android tablet and keyboard, but if it's the setup you're after, then the Logitech PRO is a very usable option to accompany that massive tablet - assuming you don't want a backlit keyboard and can live with one usable position, of course.