Google Now is a powerful tool. A step toward Google's vision of a Star Trek computer in the palm of your hand, Now is built to serve up information that you need, exactly when you need it, without you asking for it.

To that end, the service has seen many improvements since its debut. It will tell you when your favorite teams are playing, when you need to leave to make it to the airport on time, whether your plane is delayed, and plenty of info about your destination and surrounding attractions, among numerous other things.

One of the more impressive features of Now is its ability to set really smart reminders. Reminders can be based on time, or they can be based on location, so if you say "remind me to do the laundry when I get home," Now will detect when you get home and serve the reminder.

According to a source familiar with the matter, Now will soon gain the ability to set reminders based on your proximity to another person.

Based on what we've seen, this rumor is getting a confidence level of 8 out of 10. We have deducted points both because potential future features are always a somewhat risky bet, and because we don't have evidence of a specific release timeframe. That said, we have seen enough evidence to be pretty confident in the rumor.

This rumor is fairly simple: according to our source, Google Now will add "who" to the existing "when" and "where" options for reminders. This will give users the option to get a reminder when they are "with" (near) a specified contact.

How this will be executed is unclear for the moment. Presumably, it would rely on Google's optional Location Sharing feature (part of Google+), meaning that in order to be served a reminder based on your proximity to another person, you that person would need to be sharing precise location with you. Google could serve up a list of only the contacts sharing their location with you to make the process easier. Again, this is our assumption - we don't have evidence pointing toward a specific implementation.

Our evidence is based on information provided by our source. As we stated in one of our previous rumor posts, we may not be able to provide the source images of unreleased software, but we will always try to at least represent what we can using our own mockup. You can see our mockup below on the right, along with the current reminder options on the left. 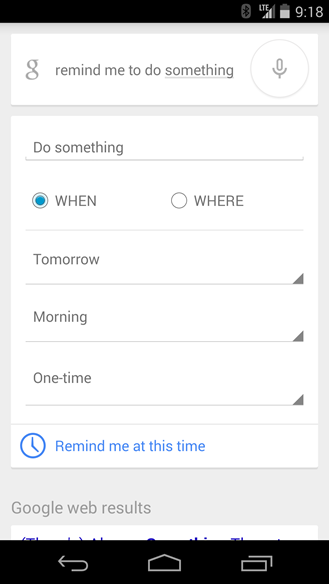 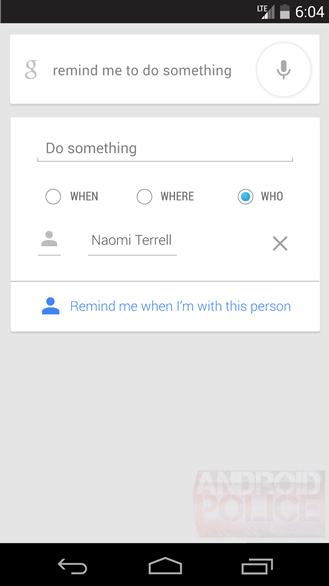 Update: As our own Cody Toombs pointed out, there's actually already a string in Google Search 3.3 suggesting this functionality.

Since location sharing isn't exactly a feature Google goes to great lengths to promote, this feature would probably require a first-run reminder or some sort of onboarding process to let users know how it works, what they'll need to turn on, etc. Once that is out of the way, though, it could be pretty cool.