Verizon's LTE version of the Galaxy Note 10.1 2014 Edition tablet is now available online. Its existence isn't a surprise following @evleaks' previous leak of the device, but today we have an official product page to point you towards. This one. You can get the tablet for $599.99 with a two-year contract or $699.99 without. 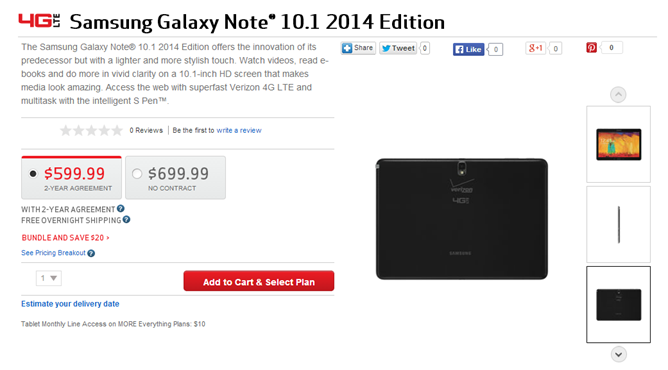 Price-wise, it's cheaper to get the standard Wi-Fi version of this device and tether it, but if you're ready to take the plunge with Verizon, what extra bang do you get for your buck? Well, in addition to speedy LTE, you also get Verizon's keen sense of sleek, classic style.

Okay, those logos aren't exactly what I'd consider classy either, but at least they're smaller than last year's.

Though if the Galaxy Note 10.1 2014 isn't the right fit for you, Verizon also has LTE versions of the smaller LG G Pad 8.3 and the larger Galaxy Note Pro 12.2 to consider.