We've been wondering what that second camera on the back of the HTC M8 (a.k.a. "The All New HTC One") was all about since the first leaks arrived. If an Australian Telstra ad for the new device is to be believed, it is indeed intended to bolster the phone's low-light shooting performance. The advertisement spotted by GSMArena reveals a few things that we didn't already know, and it does indicate that the "Duo Camera" can "create vivid images even in low light." 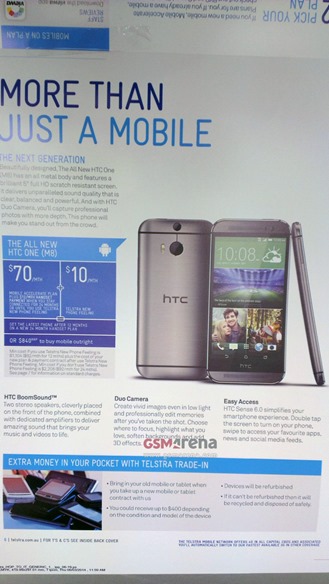 Low light photography is always tricky, and it's particularly difficult on mobile cameras thanks to their generally small sensors and lenses. This is just a guess, but I'm assuming that the secondary camera on the top portion of the M8 has a much lower F-stop value than the primary one, which might be able to create better low-light photos when combined with shots from the main camera with HDR-style software. The double LED flash module, which appears to use two different colors of light, might be part of that as well. The ad also says that you'll be able to choose where to focus and soften the background, plus add dual-camera 3D effects. HTC previously released a phone with two cameras specifically for the 3D feature, the EVO 3D, which also featured a 3D screen. There's no indication that the M8 will use that screen technology.

Other juicy bits: the Easy Access promotional text indicates that HTC's Sense 6.0 upgrade will allow users to double-tap a dormant phone to turn it on, much like LG's KnockOn feature. Telstra's price for the phone is $840 Australian dollars to buy it outright, which is comparable with other high-end phones in the Australian market. That would put it at the usual $600-700 USD price in America, with varying subsidies affecting on-contract prices.

HTC is expected to announce the new One, and possibly other hardware like a new One Mini, at its March 25th event in New York City and London.