Typically, AP refrains from covering crowd-funding projects that have not yet reached their funding goal. Sometimes, though, there comes a campaign that is just too good to pass up. These campaigns usually fall into one of two categories - either the yet-unfunded campaign is unbelievably awesome, or it's really weird and kind of ridiculous. We'll let you decide which bucket the HeadWatch falls into.

On the surface, the HeadWatch looks pretty much like any current smartwatch - it receives notifications, can manage phone calls, and has a big square display and unfashionable wrist strap. The Indiegogo page boasts "easy app deployment," a total lack of buttons, and contactless temperature sensing (see video above), along with plenty of other nice-sounding features.

What sets the HeadWatch apart though - in the minds of its creators - is the fact that the watch face can detach from its strap and attach to your head using a little fold-out ear clip. This makes it a wireless headset. The campaign claims this solves the problem of hard-to-use and frequently lost or broken headsets, but this writer is incredulous that an LCD display (presumably covered in glass) will be more resilient in the face of a head-height drop than a piece of plastic. It is believable, though, that keeping your headset on your wrist would likely reduce the risk of loss.

The page goes on to hail the HeadWatch as a contribution "to the humanity evolution," and uses the kinds of phrases about "human beings" and "simplicity" that you'd expect from a lofty-goaled tech project, along with pencil concept sketches, photos of early prototypes, and promotional photography. 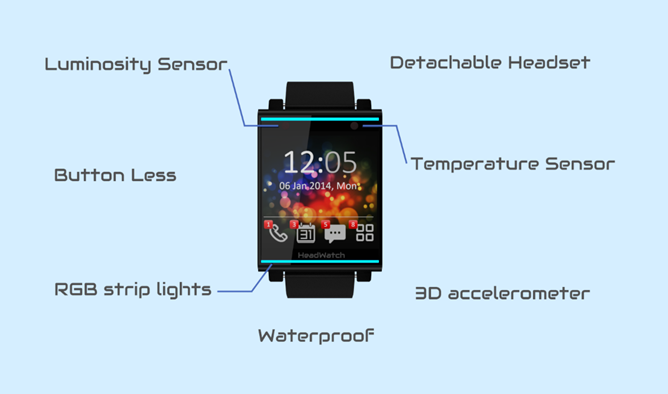 This isn't actually the first time we've seen the smart-wrist-thing-turned-headset concept. Huawei, during MWC, announced their own version of this idea with the TalkBand B1, though even the B1 looks a bit more stylish (despite having more limited functionality).

Love it or hate it, the smartwatch boom appears to be real, and shows no sign of slowing down. As companies and individuals try to perfect the concept of the smartwatch (while still fundamentally missing the reason people buy watches), we are sure to see more of these ideas. Personally, this writer dreams of a day when one's NFC ring docks into a smartwatch which slides into a phone, which docks with a tablet, which fits neatly into a keyboard dock - the RingWatchPhoneLapTab. Look for it on your favorite crowd-funding site.