Nearly every Android device available has NFC these days, but how often do you have a tag around to take advantage of it? Maybe this realization is what drove last year's NFC Ring Kickstarter campaign into multiple hundreds of thousands of dollars. Well, the rings have been making their way out to backers and pre-orders are going live for everyone on March 11th. Let's take a look at how this unusual accessory works.

The version of the NFC Ring I have to test is the standard version, but there is a so-called "Alpha" ring also available. The main difference is the width of the band. A regular NFC Ring looks like any standard metal band, with the exception of the NFC tags. The Alpha ring is much wider to accommodate a larger NFC tag. We'll get to the reason for that shortly. The ring comes in a variety of colors and styles – mine is the basic titanium band with transparent tag inserts. I actually kind of like the look of having the tag circuitry exposed, but you can customize your ring to look less like a nerd-accessory. The regular ring is $49 and the Alpha is $59. 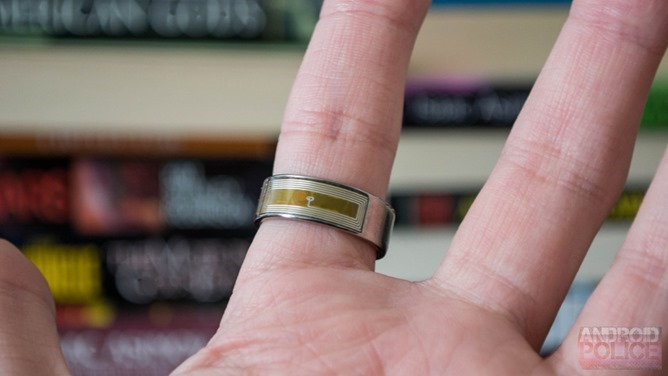 All the rings use NXP Semiconductors NTAG203 NFC tags. Just like the tags you'd get in other forms online, they do not need their own power source. The signal from your phone does all the work. The capacity of the tags is only 144 bytes, so don't confuse this with a data storage medium. It's ideal for keeping web addresses, blocks of text, encryption keys, NFC tasks, and contact information. There is also a lock screen app specifically for the NFC Ring in Google Play. You can write whatever you want to the two tags, perhaps using one for private information and one for public. 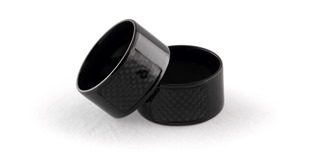 The other styles of NFC Ring

The NFC Ring will work with any sufficiently powerful NFC reader, so you can use it with NFC door locks and security systems, assuming you have one of those. It's also completely sealed and water proof, so you don't have to worry about damaging it and locking yourself out of something.

It takes a balancing act to make something like the NFC Ring work – you don't want it to be too sensitive or you'd be triggering the tag constantly while using your phone. However, you want it to be sensitive enough that you can read the tag easily when you want. The tags in the NFC Ring aren't as strong as some of those you might find elsewhere, but that's not necessarily a bad thing.

To read the NFC Ring, you need to find the "sweet spot" for your phone where the signal is strongest. There's a handy setup app in Google Play that shows a heat map on the screen to help you zero in on the right location. The ring comes with stickers to put on your phone as a reminder until you get used to the location. On the Nexus 5, the sweet spot is up next to the 'S' on the back. For the Moto X it's in the middle about a third of the way up from the bottom. You'll have to do a little research to figure out if the sweet spot for your phone is in a convenient place or not.

The standard ring with its smaller tag is more finicky with finding the right spot, so the Alpha might make more sense (if you have the hand size to pull it off). I also found that the standard ring needs to be kept pretty level in order to read. The result is a slightly more awkward experience than I would prefer. You can see in the demo video above I have to tilt the phone a bit so my finger lines up correctly. It's not usually that much of a bother, but looks more odd here because my arm is resting on a table. 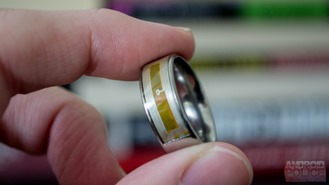 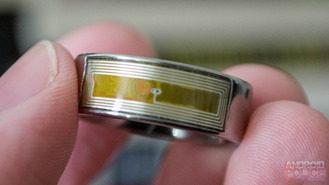 This is where the NFC Ring started feeling a little less magical to me, but the longer I used it, the less it bothered me. You essentially practice with the ring until you can tap the right spot almost every time. I've gotten pretty good at it, but if I were buying one now I'd probably get the Alpha ring to make things easier. Because it's a little hard to know where to tap on a phone other than your own, it's not yet ideal for sharing information with others.

I like the NFC Ring overall. It's not what I was expecting, but maybe my expectations were a bit unrealistic. It's just a sort of troublesome to get the reading figured out, and the tags look the same, making it hard to know which one is which. This is a cool product and I can't wait to see how it improves over time. If you're interested in the concept, you should consider picking one up. Just be aware what the NFC Ring is and isn't capable of before you order.