It's no mystery that Google has been poking around wearable gadgets for quite some time. The list of projects seems to keep growing as we hear about rumors of an LG-made smartwatch, another prototype watch designed by Motorola, and of course, Google's own Glass. Earlier today at SXSW, Sundar Pichai took to the stage to announce plans to release a brand new SDK for Android-based wearable devices in about two weeks. 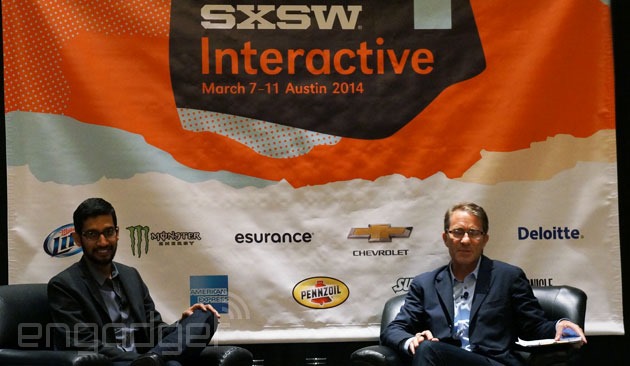 Pichai explained that the the SDK will focus heavily on better access to sensor data and improving the way devices can communicate with each other. By delivering a common platform for interaction, Google hopes to make Android more attractive to manufacturers and sway them from developing completely custom operating systems of their own. He emphasized that the goal wasn't just to reach the current stream of smartwatches and fitness bands, but also less conventional products, like a jacket equipped with sensors.

Engadget reports that Google will eventually offer its own devices based on this platform, but that Sundar was quick to point out that it would be a while before such gadgets went to market. Collecting feedback from developers and evolving the platform to support the market would come first. No comments were made as to what devices would support the SDK or if there are any specific plans, but those details may become available with the release.