Another week closer to HTC's big New York event, another huge leak from the indefatigable Evleaks. This time he's taken to Google+ to show off what looks like a first-party case for the HTC M8 (a.k.a. "The New HTC One"). This case it unlike any we've seen thus far: instead of a transparent "window" like the ones that Samsung and LG have been using for their flagships, this one appears to be covered in tiny holes, allowing the screen below to flash simple messages. 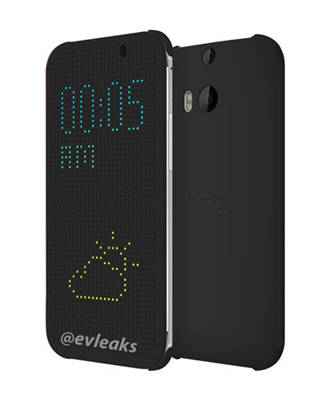 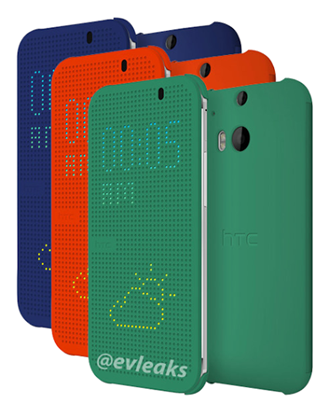 The idea of at-a-glance updates isn't new - Samsung was the first to investigate some non-conventional solutions with their "S-View" covers, and Motorola probably has the best device-only solution with its Active Notification feature. This black case seems to rely on the phone's screen below to illuminate small areas of the display and create a message, the time and weather in this example. Assuming that the case is indeed punctured (as opposed to covered in low-powered LEDs or something), that would keep the screen protected and allow users at least some kind of heads-up data without opening the case cover. On the other hand, it could be a battery drain - the Active Notifications feature only works so well because it relies on the power-saving function of an AMOLED screen, and HTC has been favoring Super LCDs for its flagships the last few years.

Evleaks also expects for HTC to release a Google Play Edition of the M8, matching the original HTC One GPE already available in the Play Store. That would be good news for the significant portion of HTC fans who love the company's hardware, but aren't so enamored with the Sense UI software overlay. It would also be good for the Google Play Edition program in general, since it still represents a tiny minority of Android devices.

We're expecting both the HTC M8 and the M8 Mini at HTC's New York City event on March 25th.