Customers who want Android tablets on Verizon's admittedly excellent LTE network tend to have only a few options, but there are two more this morning. Flagships from both LG and Samsung, the G Pad 8.3 and Galaxy Note Pro (or NotePRO) 12.2, are now available as branded Verizon devices. You can pick both of them up on the carrier website, and they should be available at retail stores either today or soon after. 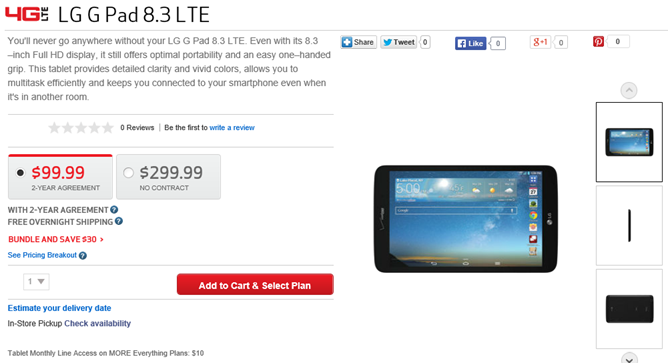 The LG tablet is probably the better choice, at least if you want a more standard size and a lower price. The 8.3-inch, 1080p tablet is going for just $99.99 with a new two-year service agreement (marked as a "limited time offer"), or $299.99 if you go for a month-to-month payment plan. Strangely, the off-contract price is actually $50 lower than the price for both the standard WiFi model and the Google Play Edition sporting AOSP. The G Pad is a respectable mid-size device with stereo speakers, a metal chassis, a Snapdragon 600 processor, 2GB of RAM, a 5MP rear camera, and 16GB of storage plus a MicroSD card slot. The biggest weakness is easily LG's skinned version of Android 4.2.2, and considering Verizon's nearly universal practice of locked bootloaders, the LTE version of the tablet is unlikely to get much support from the ROM community. 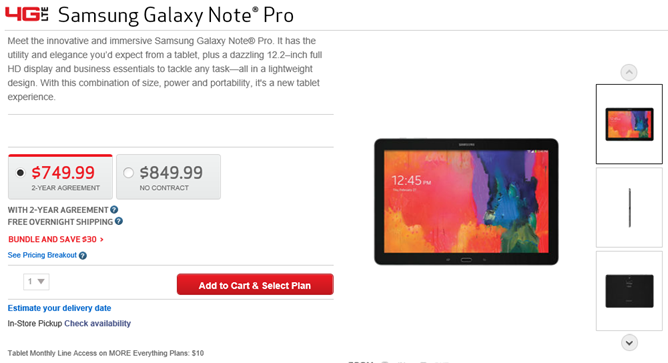 The Galaxy Note Pro 12.2 might be a perfect example of mobile technology excess. The biggest feature, and one that might actually turn off a few users, is the 12.2-inch screen. It's a massive 2560x1600 panel, complete with a built-in S-Pen stylus and a Wacom digitizer, like all Notes. The LTE version has a speedy Snapdragon 800 processor, 3GB of RAM, 32GB of storage plus a MicroSD card slot, and a full 8MP rear camera. The large dimensions of the tablet allow it to cram in a 9000mAh battery in its 7.8mm frame, and it uses Samsung's new standard USB 3.0 port for charging and data transfer. Despite the huge size, Samsung made the baffling decision to go with physical navigation buttons, which will no doubt make this a two-handed tablet at all times. Software is a fresh build of KitKat 4.4 plus Samsung's new-and-improved "Pro" version of TouchWiz.

The price on the Samsung tablet is, frankly, astonishing. The base price is $749.99 with a two-year data plan, or you can add another hundred bucks to buy it with a month-to-month plan. That makes the on-contract device the same price as the 32GB WiFi model, so you're actually paying Verizon a premium if you want to avoid a subsidy. Any takers?