The newer Samsung tablets like the Galaxy Tab Pro 8.4 might have better technical hardware than the year-old Note 8.0, but they've also got some sky-high prices. If you want a good deal on a mid-size tablet with a stylus and digitizer, Groupon has a refurbished model of the Galaxy Note 8.0 for just $229.99. The deal includes free shipping, but it's only available for another five days and change. 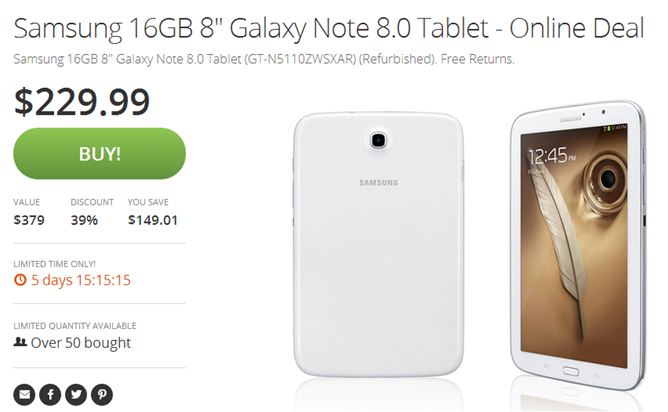 The Galaxy Note 8.0 was the first smaller tablet to bear the Note brand, and it was a decent (if somewhat overpriced) alternative to the Nexus 7 and other slightly smaller tablets. Highlights include 2GB of memory, an Exynos 1.6Ghz quad-core processor, and a MicroSD card slot. Some of the less impressive features res its 1280x800 screen (which hasn't aged well in light of 1080p tablets like the 2013 Nexus 7 and the G Pad 8.3), physical navigation buttons, 5MP rear camera, and Samsung's usual heavy build of TouchWiz. It also feels kind of flimsy thanks to an all-plastic frame and glossy finish. Check out our exhaustive review for more info.

Still, if you want a mid-range tablet, this is a great price - you won't find one from a major brand in the elusive 8-9" category quite so cheap. If you were to buy it brand new from Amazon you'd still pay $317 almost a year after the device's release. And if you're going that high, you might as well splurge for the LG G Pad 8.3, which has a 1080p screen, a metal body, and a Google Play Edition running KitKat.

The Groupon deal is good for the United States, but won't ship to Alaska, Hawaii, or Puerto Rico. The refurbished tablet has a 90 day warranty. Supplies are limited, but it looks like they're selling through pretty slowly.