Flipboard was already making headlines today after finally adding the option to sign into the Android app with Google+. But it looks like they'll soon have a lot more headlines to choose from, namely the ones that constantly appear on CNN.com. Flipboard announced this morning that the company will be partnering with the venerable TV and web news service, bringing both standard and international news to the platform with featured channels. Three "magazines" (read: periodic blog updates) will also be featured, from personalities Jake Trapper, Fareed Zakaria, and John King. 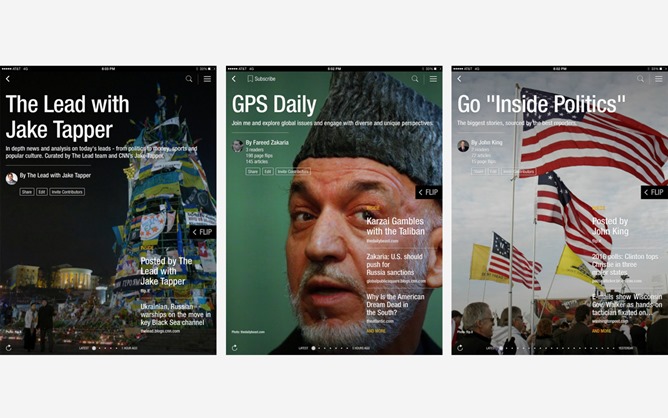 But wait, there's more! In an undeniably linked deal, Flipboard has also purchased Zite from CNN. Zite is a competing magazine-style news service that also repackages Internet posts into easy-to-read and easy-to-share feeds, very much like Flipboard itself. Zite, Inc. is - or was - a subsidiary of CNN. According to Flipboard's company blog post, the acquisition was made to improve the former's personal news recommendations. The Flipboard and Zite development teams will be merged.

Over on the Zite blog, co-founder Mike Klass confirms that the separate Zite app will be going away eventually, though it will be sticking around for at least the next six months. The company is hoping to offer Zite users a way to import their data into Flipboard as the parent company's app incorporates more of Zite's features.

Mogees Reaches £50,000 Kickstarter Funding Goal With Promise Of Turning Anything Into A Musical ...