It's the mid 22nd century as Out There opens with a quick backstory. Earth is running short on resources, but humanity has yet to develop faster-than-light travel. Our protagonist is placed in cryogenic suspended animation for a simple trip to a moon in the outer solar system – you know, the sort of thing that happens all the time in the 22nd century. He awakens sometime later alone on the ship, and he's no where near his destination... he's out there. 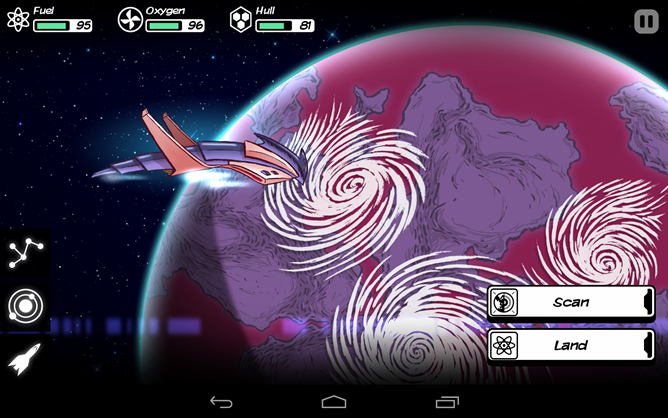 You'll learn quickly that deep space is a rough place to be. You begin receiving cryptic messages from unknown sources – a way forward... a destination many light years away. But what will you find? Don't get ahead of yourself. It's not going to be easy to get there and find out. Playing Out There seems at first like an exercise in frustration – it is brutally hard. Death is permanent, but you can learn to play smarter and account for the unforeseen, just like real life.

Your ship has three stats to be aware of in Out There. There is fuel (hydrogen or helium), oxygen, and hull (iron). Each action leeches a few points from some or all of these gauges, but you can mine for the necessary elements to keep yourself breathing, moving, and protected from the cold vacuum of space. As you hop from system to system, there will be planets you can land on and mine, as well as gas giants that can be probed from orbit. You need to be smart about when to expend fuel getting into orbit around planet, and when you ought to just jump to the next system. Visiting every planet is a surefire way to die. 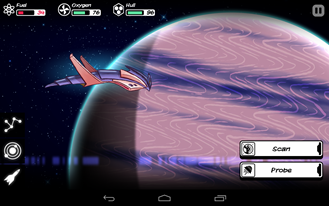 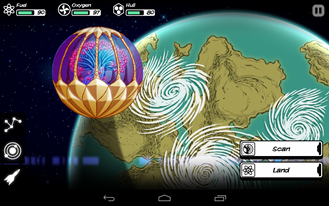 Many of your interstellar jumps will end with a tough decision – thus the choose-your-own-adventure aspect. If you make the right call, it can pay off big time with more fuel, new technology, or even a shortcut. If it doesn't, well, you can die. It might seem like a good idea to investigate that strange reading in the asteroid belt, but what if it's nothing and you waste all that fuel for no reason? This feeling of constantly being on the edge of oblivion makes every action in Out There intense (I might even say stressful). The writing in this game is absolutely whip smart too. 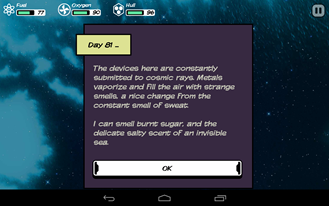 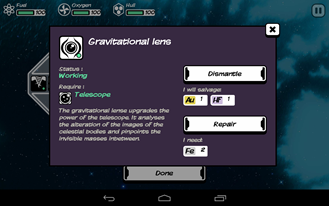 You're going to find more than just the main elements that keep you chugging along – there is gold, carbon, tungsten, cobalt, and some other stuff that isn't even on the periodic table we know. What do you do with it? You'll have to ask the aliens. When you land on a habitable planet, there will probably be some local creatures to meet. This is one of the most common choices to make as you try to talk them into revealing new technology. The elements you find can be used to make devices that improve your chances of survival (a little). 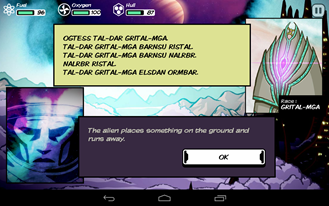 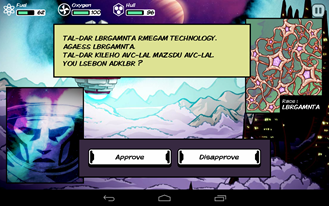 Out There forces you into gut-wrenching decisions frequently as well – do you disassemble the interstellar drive to salvage the materials to repair your mining equipment, then hope you find the resources to continue your journey, or do you make one last jump and hope you happen upon exactly what you need? It's the same cold calculation when you find a new ship (well, new to you) floating in space. It might be really fast, but if there's no space for cargo and equipment, you'll be at a serious disadvantage. The depth of problem solving and planning is excellent, especially when you consider the simple multiple-choice gameplay mechanics.

The screenshots don't quite do Out There justice – it's lovely, but not in the way a lot of other games are. It's all 2D and the animations are simple, but the style is just so interesting. It looks like a comic book came to life and invaded your screen. The space backdrops are also very easy on the eyes. 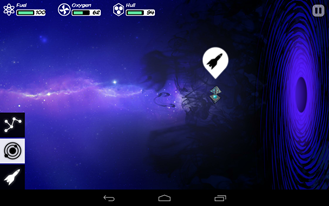 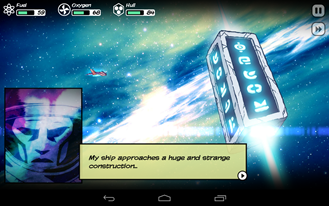 I feel like the developers missed an opportunity to make use of immersive mode (or even lights-out mode) in the Android release. Instead, those soft buttons are staring at you the whole time. This game draws you in – it's really a perfect example of something that would benefit from clearing the screen of clutter.

The audio in mobile games is usually a bit of a throwaway, but not in this case. The soundtrack was composed by Siddhartha Barnhoorn to be perfectly complementary to the gameplay. It's atmospheric and a little eerie. You absolutely want to play Out There with the sound up.

Performance is perfectly smooth, but I feel like battery consumption is a little high on the Nexus 7. Otherwise I have no complaints.

Don't Be A Dope, You Want This

Out There can be a totally engrossing experience. It's definitely not the kind of thing you play for a few minutes in line at the store – you need to sit down and get into it. The spectacularly unforgiving nature of Out There is tempered by the speed with which you can get into a new game. Each game is like a roll of the dice – you might play for an hour and make poor progress before dying, then manage to cover more distance in a fraction of the time in your next game. 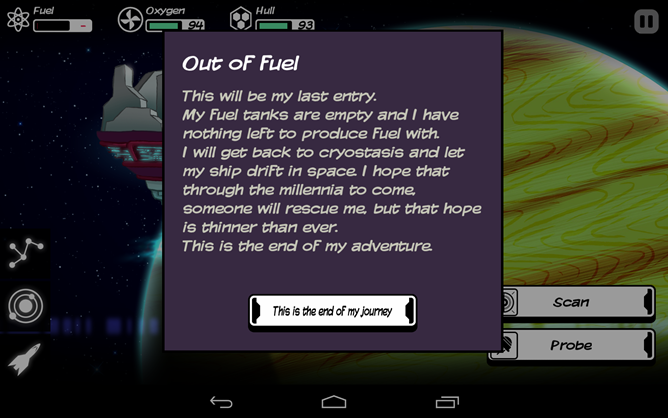 The story elements are revealed very slowly as you make decisions and get better at the game. Everything you do matters in Out There, which is uncommon for a mobile game. Even though death is almost inevitable in Out There, I still want to play it – a lot. If you have even a passing interest in adventure games or science fiction, buy this for only $4. Note, the Play Store says there are in-app purchases, but I haven't seen them anyplace in the game – could be a mistake.