No, you're not the only one seeing something odd in the web Play Store – the reviews are all missing the Google+ profile data usually associated with them. Everything says "A Google User" instead. You can still leave reviews, but they won't show up with your name online.

This appears to be universal on the web interface, but hasn't affected the Android app. Note, that includes all content, not just apps and games. We first noticed this issue a few days ago, but unlike most Play Store bugs, this one hasn't been fixed yet. There was a dustup when Google started requiring Google+ accounts to leave reviews, but that's mostly died down. It's unlikely this is any sort of reversal, so don't get your hopes up. 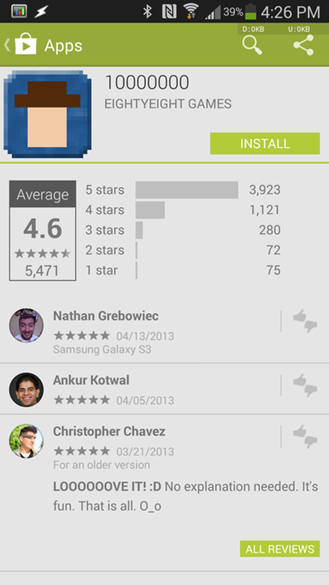 I'd bet that Google will get this fixed at some point this week, or possibly even today. You can check out any listing (like 10000000) to see for yourself.

Update: And indeed, Google seems to have fixed this in the early afternoon. Apparently Google+ reviews aren't important enough for anyone to take time out of their weekend.

Paranoid Android Team Clarifies v4 Plans, Will Rewrite The ROM From Scratch In A "Googly" ...